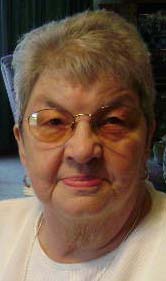 Funeral services will be held at 1:30 pm Friday, June 1, 2012 at Fullerton Funeral Home, 123 2nd ST. SE, Mason City. Officiating will be the Rev. Linda Johnson-Prestholt of Grace Lutheran Church, Hanlontown. Visitation will be from 4:00 until 8:00 pm Thursday and again one hour prior to services at the funeral home. Interment will be in Memorial Park Cemetery, Mason City. Those planning an expression of sympathy may wish to consider memorials to the Dixie Schaer memorial fund. Condolences may be shared with the family at Fullertonfh.com or Facebook.com/Fullertonfuneralhome.

Dixie was born one of five children to Theo and Vivian (Putney) Cree on July 8, 1936 in Charles City, Iowa. She attended school in Charles City and then graduated from Mason City High School. For a short time she was engaged as a Title Clerk for Central States Auto Auction. Most of her life she raised her children, babysat hours and hours for her grandchildren and the neighborhood children. A job she was absolutely destined for and enjoyed immensely. She met the love of her life at the Moose Lodge where both had gone to have fun. She was united in marriage to Lloyd John Schaer on December 16, 1959 at Grace Baptist Church in Mason City. No one was a stranger to Dixie after a short time; she greeted everyone she met with kindness and compassion. She loved to bowl and looked forward to sharing time with her bowling friends. Along with her daughter Vickie she competed in city tournaments winning several which made both of them proud. She was a member of the US Bowling Congress and the 500 and 600 club. Once a month on a Wednesday night, she would join her classmates at various restaurants to share events in their lives. Dixie will always be remembered for her talent in sewing, making anything from doll clothes to curtains, wedding dresses and especially her quilts. She was a member of the North Iowa Quilters Quild  where she served in many capacities. Two honors she achieved were making the 2012 quilt for the raffle at the Newman High School, and making the world trade center 911 firefighters quilt which may be seen hanging in the Mason City Fire Department. She was active quilting with friends at the Senior Citizens Center and taught others the skills of knitting, crocheting and quilting. Often you would hear her say “Here let me show you” as she passed on her knowledge. Once a month she attended dances at the VFW, where she often enjoying her favorite band “Full House”. She was a life member of the VFW Auxiliary. Not to sit still she often attended dog shows with her daughter Tammie.  Dixie also attend auctions to help serve food with her daughter Trace. Dixie could play a “Mean Game” of Liverpool Rummy with her family members. She relished her dinners with her special niece Carren and her trip to Branson, MO.

Those thankful in sharing Dixie’s life where her “Girls” Vickie and husband Jim Ward, Fertile; Tammie and her husband Bob Calvert, Mason City; Tracie and her husband Doug Cooper, Manly; and her recently reunited daughter Mary Jo and her husband Bob Carsens, of College Station, Texas who traveled back to Mason City so mom could be part of the wedding. Also included are her five grandchildren Aaron Boyenga, Britt; Brandie and Jessie Cooper, Manly; Jessie (Roy) Mathis and Billie Jo Bronner, both of Texas; two great grandchildren Ethan and Ashtyn Mathis; one sister Pat (Rodney) Hanson, Clinton, IA; one brother Donald (Bernice) Cree, California, many nieces and nephews and grand dogs.

Her parents, Husband Lloyd, one sister Shirley Tanner and one brother Max Cree preceded her in death.