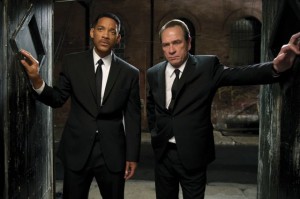 This third go-round throws lots of talent at the screen, from the effects-cluttered frames to the A-list supporting cast, featuring Josh Brolin, Jemaine Clement and Emma Thompson. Maybe 40 percent of it sticks. On the other hand, there’s the patched-together script, haphazard direction and an ending that, given the level of expectations for the series, isn’t exciting enough. It’s OK.

Once again the key to the film is Will Smith’s self-deprecating charm and his easy chemistry with his capable co-star, Tommy Lee Jones. As field agents for a secret interplanetary version of the Immigration and Naturalization Service, they keep tabs on Earth’s resident aliens, hunting down undesirables and using neutralizer wands to impose amnesia on any civilians who observe them in action.

When the series debuted in 1997, the concept was fresh and sparky, with lean, uncluttered storytelling. It was huge fun the first time through. But once the idea was established — our planet is a “Star Wars” cantina of extraterrestrials in disguise — we’d reached the punch line. It looked like the end of the line in 2002’s terminally bloated “MIB2.”

A decade after that untidy sequel, what’s left to carry the story is the ingenuity of makeup master Rick Baker’s ingenious alien designs, and the performances of Jones as battle-hardened grouch Agent K and Smith as his upbeat partner J. It’s still an effective pairing. Jones seems to live for heavy sighs and barked commands; Smith has aged out of the eager-beaver protégé role, but he still has a puckish lightness of spirit. Even if the scene is nothing more than the two of them eating pie at a diner, they’re fun to watch.

This outing makes an effort to freshen the mix with a time-travel plot. Director Barry Sonnenfeld, a fan of ham-fisted comedy, establishes the cartoonish tone at the outset. His camera leers as a slinky prison visitor (former Pussycat Doll Nicole Scherzinger) delivers an extremely suspicious pink cake to blustering villain Boris (Clement, all gnashing teeth and basso profundo growls). A few explosions later, Boris is back on his alien motorcycle abetting an invasion force of giant floating jellyfish. Worse, K vanishes into a temporal wrinkle, leaving J no partner with whom to banter.

To rescue K and thwart the alien assault, J must travel back to 1969, on the day of a historic U.S. rocket launch. There he meets a younger version of K (Brolin, doing a knockout Jones impersonation) who is a lot more agreeable than the vinegary sourpuss of 2012. The action builds to a scene of four-man fisticuffs atop Apollo 11 as it’s about to lift off.

There’s a touch of desperation about the back-to-the-future ploy. Michael Stuhlbarg (“A Serious Man”) appears as a fifth-dimensional idiot savant tasked with giving the audience unedifying explanations of the laws of time travel. It all sounds pretty arbitrary, frankly.

Sonnenfeld depends on crashing action and hyperventilating camera moves to puff up the slack blimp of a story. Unfortunately, there’s one effect that computer-animation technicians can never duplicate: a genuine sense of fun.

“MIB3” is at its best when it throttles back the action to admire its actors. As the new head of the MIB agency, Thompson brings her luminous intelligence to bear on not very inspired jokes, improving them immensely. Jones grimaces and sighs eloquently, and Smith has a cracklingly funny scene when he runs afoul of 1969 racial profiling. Brolin’s performance goes beyond mimicry to something authentically touching in a poignant scene at the conclusion. Even in a brief cameo, Bill Hader scores as Andy Warhol, whose studio is presented as a hangout for artsy E.T.s.

Still, these moments are more like skits than elements of a coherent plot. I liked bits and pieces of the film but I never felt the jigsaw puzzle was fully assembled.