Zak Ebrahim, author of the NIACC Common Read The Terrorist’s Son, to present on Oct. 24 on campus 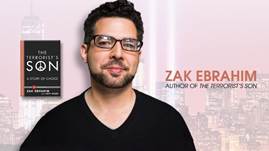 When Zak Ebrahim was seven years old his father took him and a small group of men to a shooting range for target practice. “When it was my turn to shoot,” Ebrahim explains, “…the last bullet that I shot hit the small orange light that sat on top of the target, and to everyone’s surprise, especially mine, the entire thing burst into flames.” Zak’s uncle turned to the other men and in Arabic said, “Like father, like son.” The entire group burst into laughter. “It wasn’t until a few years later that I fully understood what they thought was so funny,” Ebrahim says. “They thought they saw in me the same destruction my father was capable of.”

On November 5th, 1990, when Ebrahim was seven years old, his father assassinated Rabbi Meir Kahane, leader of the Jewish Defense League. Although initially acquitted of the murder, he served time on assault and weapons charges and began planning attacks on a dozen New York City landmarks including tunnels, synagogues, and United Nations headquarters. Thankfully those plans were foiled by an FBI informant. Sadly, the 1993 bombing of the World Trade Center was not. Ebrahim’s father, El-Sayed Nosair, would eventually be convicted for his involvement in the plot.

For Ebrahim, a childhood amid terrorism was all he knew. After his father’s incarceration, his family moved more than twenty times, haunted by and persecuted for the crimes of his father. Though his radicalized father and uncles modeled fanatical beliefs, the hateful ideas never resonated with the shy, awkward boy. The older he grew, the more fully Ebrahim grasped the horrific depths of his father’s acts. The more he understood, the more he resolved to dedicate his life to promoting peace.

As an adult, Ebrahim realized the only way to overcome the challenges of his past was to help others understand that hatred only produces more hate, but belief in non-violence heals. Those cycles of violence, no matter how old, do not have to continue forever. He argues that everyone, regardless of their upbringing or circumstances, can learn to tap into their inherent empathy and embrace tolerance over hatred. His original, urgent message is fresh, groundbreaking, and essential to the current discussion about terrorism.

Ebrahim has twice spoken at TED events. In 2013, he participated in TED’s talent search in New York City and was selected to speak at the main conference, TED2014, in Vancouver, BC. His TED talk was released on September 9, 2014, in conjunction with his TED book, The Terrorist’s Son: A Story of Choice.

The Common Read is a program designed to engage North Iowa Area Community College students, staff, faculty, and community members in a unified intellectual activity. For first-year students, it introduces them to academic expectations, respectful discourse, and community building. The Common Read is supported by the Performing Arts and Leadership Series. First- year students will be asked to read the book as part of their Composition One requirements.

The Common Read book is available through the NIACC Book Zone.

This program is supported by the Academic Affairs board of the institution and a host of individual faculty, staff and community members on the Common Read Committee.

To learn more about Zak Ebrahim and the 2018 NIACC Common Read The Terrorist’s Son, visit his website at www.zakebrahim.com, or watch a video at www.niacc.edu/palvideos.

For tickets to the presentation, call the NIACC Box Office at 1-888-466-4222, extension 4188. Tickets may also be purchased online at www.niacc.edu/boxoffice.