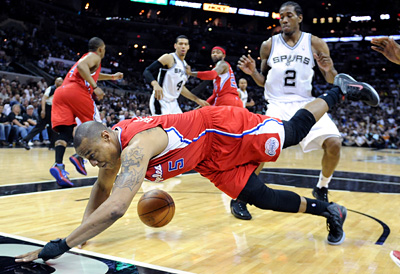 They protected their home court, the Los Angeles Clippers said after the San Antonio Spurs won, 105-88, Thursday night in Game 2 of the Western Conference semifinals at the AT&T Center.

They did what they were supposed to do, the Clippers said after the Spurs opened a 2-0 lead in the best-of-seven series.

(PHOTO: The Los Angeles Clippers’ Caron Butler falls to the floor chasing a loose ball in front of the San Antonio Spurs’ Kawhi Leonard (2) in Game 2 of the Western Conference Semifinals at the AT&T Center in San Antonio, Texas, on Thursday, May 17, 2012. The Spurs rolled, 105-88, for a 2-0 series lead.)

They have held serve and now it’s up to us to hold serve on our home court, the Clippers said.

“We can’t put our heads down,” said Chris Paul, who had his second sub-par game in the series. “We’re not playing against a bunch of scrubs. They are a good team.

“At the end of the day, they won their two games. We go home and they get one of those, we’re in trouble. But I think right now, we’ve got to protect our home court. We’re going to need our L.A. fans to support us.”

The Clippers will host the Spurs in back-to-back Games 3 (Saturday) and 4 (Sunday) at Staples Center, meaning both teams will play three games in four days.

For the Clippers, it will be nine games in 16 days.

The Spurs are on a roll, having won all six their playoff games, 16 straight dating back to the regular season.

They had five players score in double figures, led by Tony Parker’s 22 points and Tim Duncan’s 18.

“It just the fact that we are going home and we tend to play better at home,” Blake Griffin said. “We’re not going into these next two games thinking, ‘Let’s try to keep it close.’ There’s no moral victories and moral losses here. We’re not worried about how many points we lost by.”

It didn’t help that Griffin had 20 points and just one rebound.

“I personally have to do a better job of rebounding,” Griffin said. “I should never have one rebound in (36 minutes, 51 seconds) of play.”

It didn’t help that Paul had just 10 points and a career-high eight turnovers. The Clippers had 18.

“I don’t ever recall having that many turnovers,” Paul said. “Man, it’s just that many possessions we don’t get.”

It didn’t help the Clippers that Griffin added a left hip flexor injury to a sprained right knee.

“That’s kind of what happens when you hurt one and you kind of hurt something else,” Griffin said. “But this one shouldn’t be too bad.”

It also didn’t help that Paul continued to play with a strained right hip flexor.

He didn’t look the same, but he refused to admit that the injury is affecting his game.

It didn’t help the Clippers when Griffin was called for a flagrant foul-one for hitting Parker in head on a drive to basket with 2:57 left in the fourth quarter and the Clippers going down by 19 after Parker made the two free throws and scored on a jumper.

“Come on, I’ve been hit way harder than that,” Griffin said to referee Ed Malloy, who made the call.

The Spurs shot just 30.8 percent (four-for-13) from three-point range in the first half, but the heated up in the second half, making 50 percent (six-for-12).

They shot 53.2 percent from the field for the game, seeming doing whatever they pleased against the Clippers’ defense.

“I want us to battle,” Del Negro said. “I want us to claw, do whatever we have to and give ourselves an opportunity. I expect us to play better than we have the last couple of games.”