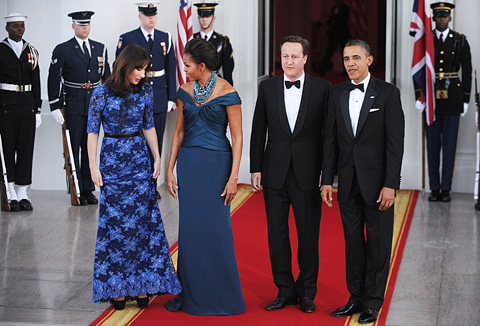 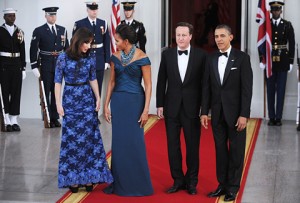 The Obamas showcased the capital’s early burst of spring at their sixth state dinner, hosting the soiree in a glass-sided tent on the South Lawn. Tall citron-colored candles and lush bouquets of purple and green hydrangeas decorated tables draped in stripes or bold geometric prints.

The four-course menu’s main offering was bison Wellington, billed as a “marriage” of the two countries’ traditions. The first course was crisped halibut, the second a salad with greens from the White House garden. Dessert was an old British favorite, warm lemon pudding.

The menu was an ode to America’s west: the halibut was from Alaska, the bison was from North Dakota, and huckleberries from Idaho flavored the dessert. Wines from the U.S. were paired with each course, but the White House did not divulge their names.

After the meal, the reception was to feature performances by R&B singer John Legend and British folk band Mumford and Sons, said to be a favorite of Cameron’s wife, Samantha.

Before the big bash, Michelle Obama invited U.S. and British schoolgirls to feast their eyes on the bold-colored tables and sample the pudding. She told the girls they’d be the first to taste it, then remembered: “I think me and Grandma and a couple of people, we’ve tasted the desserts.”

Other British prime ministers feted at White House state dinners were Tony Blair in 1998, Margaret Thatcher in 1988 and James Callaghan in 1977. Queen Elizabeth II was honored at a white-tie affair by President George W. Bush in 2007 — 193 years after the White House crumbled in flames.