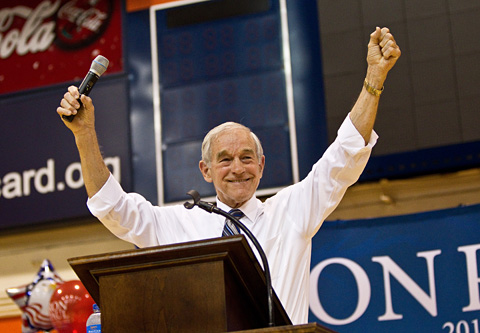 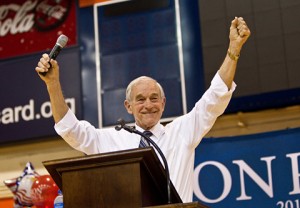 (PHOTO: Republican presidential candidate Ron Paul talks to supporters at a town hall meeting at the University of Illinois in Champaign, Illinois, on Wednesday, March 14, 2012.)

It’s not exactly an even nomination fight at the moment. Romney remains the clear favorite, though his campaign advisers don’t expect him to lock up the needed 1,144 delegates before May, at the earliest. Santorum scored upset wins Tuesday in Mississippi and Alabama but is unlikely to gain enough delegates during the primary season to overtake Romney. Instead, the insurgent challenger is attempting to keep him from obtaining a majority before the summer’s national convention.

That has added unexpected drama to next week’s Illinois primary. “Santorum needs a big unexpected win to fundamentally alter the race,” said Republican strategist Mike DuHaime, who is unaligned this year. Illinois, he added, would fit that category.

The state, large and diverse, is not as conservative as others where Santorum has been successful. But a recent Chicago Tribune/WGN poll showed him only four percentage points behind Romney, with Newt Gingrich far back.

The Romney forces are again bringing their considerable financial muscle to bear, throwing millions of dollars into Illinois attack ads against Santorum, who has been slow to get on the air. The former senator still lacks the financial resources to muster an effective ad response and is relying, as he has up to now, on support from social and religious conservatives and a hoped-for infusion of enthusiasm from his latest electoral successes.

“Santorum has to win on Romney turf. Period. He has to demonstrate that he can expand beyond the prairie (and surrounding) states and can branch out more than to just Gingrich territory. Otherwise, it won’t be enough. Illinois would be a good starting place,” Josh Putnam, a political scientist at Davidson College who specializes in GOP delegate rules, said in an email.

Romney’s “best opportunity” involves a win in Illinois, victories in Maryland, Washington, D.C., and Wisconsin on April 3, and a stellar showing in the five mid-Atlantic/northeastern states on April 24, he said.

The fastest route for Romney to gain the delegates needed to secure the nomination would be to force the others from the race. Yet on Wednesday, Gingrich reaffirmed his determination to stay in, leaving Republicans with a pair of unappealing scenarios. The first is a drawn-out internal fight that, up to now, has often served to highlight Romney’s shortcomings as a candidate. The other is a deadlock that runs all the way to the convention at the end of August, with potentially dire consequences for GOP chances against President Barack Obama.

The prospective nominee would hope to spend the months after the primaries end in late June uniting the party, raising fresh campaign funds and turning voter attention toward the general election contest with Obama. A summer-long fight over delegate loyalties and party rules, and a nomination that remained unsettled until the convention for the first time since 1976, would squander the chance to turn the meeting in Tampa, Fla., into a vast campaign commercial.

“Modern political conventions are the most important political communications opportunities that the parties have, and to lose that opportunity is a huge problem. That’s what we’re talking about when we talk about taking the fight all the way to the convention,” said GOP strategist Vin Weber, a Romney campaign adviser.

For Romney to bend the primary-season narrative in a more positive direction, he should stay locked in on Obama’s “failed economic policies,” Weber said, adding: “This is an incredibly vulnerable president. Republicans have an excellent opportunity, provided we can refocus on him rather than on each other.”

The Santorum strategy boils down to depriving Romney of the nomination through a series of primary victories that steadily undermine confidence in the former Massachusetts governor. A string of Romney defeats could prompt defections from unbound delegates and party leaders who are automatic convention delegates.

Santorum’s chances of pulling off that feat would improve if Gingrich, who has lost 25 of the last 26 contests, were to quit the race. By splitting the anti-Romney vote, Gingrich makes it more difficult for Santorum to achieve “momentum” wins, which generate waves of positive publicity.

With Gingrich out, Santorum could unify conservatives and get a clear shot at Romney. But at a subdued rally Wednesday in the outskirts of Chicago, Gingrich reaffirmed his intention not to quit.

“I am staying in this race,” he told fewer than 100 people at the convention center in Rosemont. “I look forward to getting to Tampa with your help.”