Back to school: ‘21 Jump Street’ reinvents the cult TV show 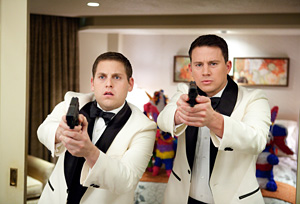 MIAMI — The idea of a movie spinoff of “21 Jump Street” — the cult TV series about a group of police officers, led by Johnny Depp, who worked undercover as high schoolers — had been kicking around Hollywood for nearly five years. The late Stephen J. Cannell, one of the show’s original creators, had contemplated it. Action-picture producer Neal H. Moritz (“Fast Five,” “S.W.A.T.” and “I Am Legend”) had circled it.

But it was Jonah Hill, the star of comedies such as “Superbad” and “Get Him to the Greek,” who finally figured out the best way to transplant the admittedly preposterous premise of the series onto the big screen: Turn it into a flat-out, no-holds-barred comedy with a hard-R rating.

“All I ever saw in this project was an opportunity to make the most fun movie ever,” says Hill, who also co-wrote and executive-produced the film. “I didn’t want to change people’s lives. I just wanted an hour and a half of pure fun. And I think that’s how it turned out.”

“21 Jump Street,” which opens Friday, is a rare breed of Hollywood studio comedy: One in which all the creators — both in front and behind the camera — are in perfect sync chasing after the same loopy vision. Hill and Channing Tatum star as a pair of newly minted police academy grads who are tasked to the Jump Street unit and assigned by their barking-mad captain (Ice Cube) to pose as high school students — and brothers! — to bring down a drug ring.

That simple description does not do proper justice to the insane tone and energy of the movie, which at times reaches the manic intensity of vintage Looney Tunes, but never at the expense of characters or story. As raunchy as the film gets — and you really should take that R-rating seriously — “21 Jump Street” works because of the touching, genuinely sweet bond between Hill and Tatum, and also because the movie also has a real narrative spine, exploring how our high school years leave the kinds of marks time can never erase.

The unlikely combination of utter lunacy and real heart began at the script level, when Hill collaborated with screenwriter Michael Bacall (“Project X,” “Scott Pilgrim vs. the World”) on an original story treatment.

“Mike, in a nutshell, is (expletive) crazy,” Hill says of his writing partner. “He’s so anti-authority and establishment. He and I worked well together, because he would come up with a lot of insane ideas, and I need things to be rooted in reality, so the combination really worked.”

Once the script started making the rounds, it caught the attention of co-directors Phil Lord and Chris Miller, who had made their feature film debut with the animated hit “Cloudy with a Chance of Meatballs” but were now looking for a change of pace.

“We do love animation, and we’re working on a Lego movie right now for Warner Bros. that’s mostly animated,” Miller says. “But we didn’t want to get pigeonholed. So we thought ‘What’s the opposite of ‘Cloudy’?’ Oh yeah, a hard-R action-comedy! But there was definitely a little bit of skepticism at first.”

But nothing in the movie would have worked if Hill hadn’t found the perfect actor to play his partner. For Tatum (“The Vow,” “The Eagle,” “Fighting”), “21 Jump Street” was an opportunity to hit some notes he hadn’t yet played as an actor.

“I really had no intention of ever jumping this far down the comedic rabbit hole,” Tatum says. “I always knew I eventually wanted to try it, but I was always kind of apprehensive, because it’s a real skill. These guys work really hard at it. It’s not like they just show up and do their schtick and boom, the movie’s awesome. They’ve taken years to learn where the joke is and what’s funny and what isn’t. I probably wouldn’t have done this movie without someone as experienced as Jonah. And Chris and Phil brought a unique energy to it that made me feel safe as well.”

Despite his lack of experience with the funny stuff, the actor proved to be a natural. In one scene in the film, Hill is trying to talk on the phone while Tatum pelts him with an assortment of rude gestures and objects, including a rather impertinent stuffed giraffe.

“That scene was written as just Jonah talking to a girl on the phone,” Lord says. “We did it in rehearsal a million times. But on the set, we told Channing, ‘At a certain point, come into the room and (mess) with Jonah and do whatever you want.’ So we can’t take credit for the giraffe (sex acts) or anything else. That’s pure Channing, based on years of being a guy. Are you familiar with Malcolm Gladwell’s 10,000-hour theory? I would say that Channing has become the world’s expert at messing with your friends and doing gross things to them.”

By all accounts, the mood on the set was convivial: Everyone in “21 Jump Street” was tuned into the same frequency of funny, and the camaraderie on the set is reflected in the finished film, which has earned early raves.

“When you’re dealing with actors who are as good as Jonah and Channing and directors like Chris and Phil who know how to get the best out of everybody, it all becomes about the dance,” says Ice Cube. “First you learn your lines, and then you start to add the ad-libs and the little nips and tucks and mold it all together. If you’re just improvising on the set, it can get actorly real fast. We were trying to make this movie feel natural and real. The trick is not laugh when someone hits you with something you’re not expecting, because then you can’t use it. You gotta put it in your pocket and wait until they tell ‘Cut!’ and then laugh. I had to do a lot of that on this movie.”

Johnny Depp’s cameo in the movie adaptation of “21 Jump Street” has been well-known since shooting began. But how he appears in the movie has been a closely guarded secret. We asked the film’s stars Channing Tatum, Jonah Hill and Ice Cube, along with co-directors Phil Lord and Chris Miller, to talk about the mood on the set the day Depp came to shoot his big scene. Here’s what they said:

Phil Lord: “If there were a cameo, the idea was always to have it hidden in plain sight. If there were such things in the movie.”

Jonah Hill: “I don’t know what you’re talking about.”

Lord: “Our big idea was ‘Let’s have a close-up and no one will even know!’”

Ice Cube: “I don’t know what you’re talking about.”

Channing Tatum: “Don’t make me say it to you! I don’t want to say it — OK. I don’t know what you’re talking about.”