OSAGE – An Osage man accused of vehicular homicide and other charges will stand trial on August 20th.

A Charles City man was killed, and five other persons were injured On September 20, 2013 after a one-vehicle accident just east of Osage. Tylor Patrick, age 23, was the driver. He is accused of drunk driving and causing the accident, which led to charges of first offense operating while intoxicated and felony B vehicular homicide.

According to a report, at about 11:37 PM on September 20, 2013, a 1999 Oldsmobile Alero was southbound on Hickory Avenue about 1 mile north of Highway 9 when the vehicle, driven by Patrick, lost control and left the roadway. The vehicle proceeded to roll several times, coming to rest upright in the northbound ditch.

Patrick was to stand trial on July 9th, but Judge Rustin Davenport granted a continuance. He was released from jail on June 10th. Meanwhile, he has since been charged by Osage police with felony D possession of contraband in a jail and driving with a revoked license. Patrick will face these charges, as well, at the August 20 trial. 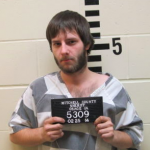