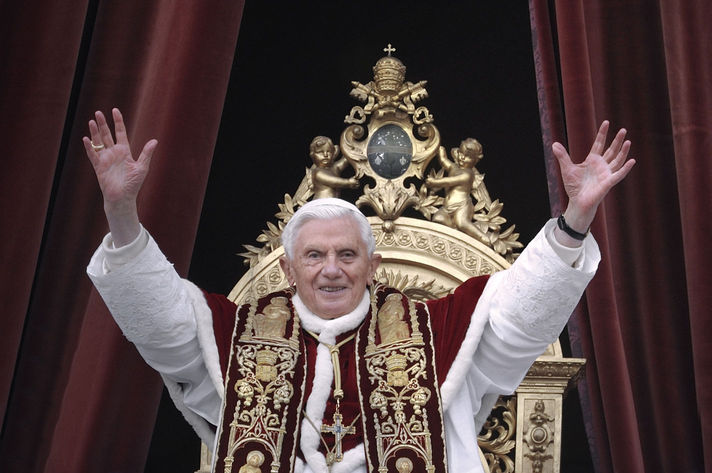 The reign of a pope has long been held to last from election until death.

The first historically unquestioned resignation was of Pope Benedict IX, one of the youngest popes, who stepped down in 1045 around age 30 — 11 years after causing a church scandal due to what the encyclopedia euphemistically calls his “disorderly life.”

Pope Victor III later described Benedict IX in a book as engaging in “rapes, murders and other unspeakable acts.”

“His life as a pope so vile, so foul, so execrable, that I shudder to think of it,” Victor wrote in his “Dialogues.”

Benedict IX, who was briefly forced from Rome in 1036 and 1044, only to return with political help, stepped down in 1045 after his godfather, the Rev. John Gratian, bribed him with “valuable possessions” to let Gratian succeed him, the encyclopedia says.

Gregory himself resigned in 1046 because of the bribery scandal, even if his intentions “seem to have been of the best,” the encyclopedia says.

When Gregory’s successor, German Pope Clement II, died in 1047, Benedict IX seized the papal throne again, only to be driven away by German troops in 1048.

He was excommunicated in 1049.

The best-known papal resignation was that of hermit Pope Celestine V in 1294. After only five months as pontiff, Celestine, who the Catholic Encyclopedia describes as “saintly but wholly incompetent,” issued a solemn decree declaring it permissible for a pope to resign, and then abdicated.

He lived two more years as a hermit and then prisoner of successor Pope Boniface VIII and was later canonized.

Pope Gregory XII, who succeeded Pope Innocent VII in 1406, resigned in 1415 in a bid to end the Western, or Papal, Schism, which had reached the point where three men simultaneously claimed to be the pope — Gregory, Avignon Anti-pope Benedict XIII and Pisan Anti-pope John XXIII.

To end the strife, before resigning, Gregory convened the Council of Constance, which deposed or accepted the resignation of the remaining papal claimants and elected Pope Martin V.

The historically unclear papal resignations were of Pope Pontian in the year 235 and Pope Marcellinus in 308. There is also the postulated resignation of Pope Liberius in 366 and the 1009 abdication of Pope John XVIII, who retired to a monastery and died shortly afterward, a papal catalog indicates.