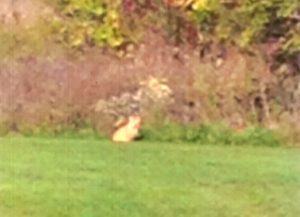 The citizen took a low-resolution cell phone photo and submitted it to police. In a news release, police say it is impossible to tell, for certain, what the creature is.

Officers and animal control went to the area of the sighting Monday morning and found no prints or evidence of the animal, which was spotted in a grassy area. Police say that coyotes and fox have been spotted in Mason City, but this is the first mountain lion report.