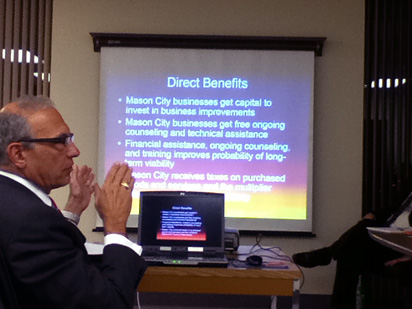 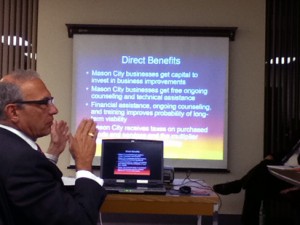 (UPDATED: Two city Council members with close family either work for or on board of  directors at NIACC.)

The program, now called the “Micro Enterprise Program” was first presented to the city a year ago at a work session by Jamie Zanios of the John Pappajohn Entrepreneurial Center (pictured, at the meeting on January 11, 2011.)

Read about the proposed agreement between the city and NIACC Pappajohn Center here.

The program would start on July 1, 2012 and have a three-year term or until $150,000 is awarded; whichever is first. Small businesses operating in Mason City could be eligible for up to $15,000 of reimbursement from the City of Mason City for certain expenses (see the proposed agreement.)Home-based businesses are not eligible.

The city will award all the dollars to eligible businesses.  The city will pay NIACC Pappajohn Center a 10% fee for every dollar it awards to businesses through the program. “For example,” it says in the agreement, “if an award is given for $2,500 to a business, JPEC will receive an administrative fee of $250 for the completion of all paperwork and oversight of that business’ award.”

The city will kick in $10,000 to the Pappajohn Center to start up the program.  They had asked for $15,000 last year when the council refused to pass the program.  The vote was 3-2 but needed 4 votes to pass.  A memorable quote from then-council member Jeff Marsters was “The test of our progress is NOT whether we add more to the abundance of those who have much, it is whether we provide enough for those who have little.  There are many who have little. Just look at the food stamp increase in Cerro Gordo county alone over the past 4 years – around 75%.”

The deal looks as though it will sail through the council with ease, this time.  Council members Travis Hickey,  Janet Solberg and Scott Tornquist all voted in favor last year, and at least one of the new council members will likely vote yes, bringing the needed 4 votes to pass the deal.

Scott Tornquist’s wife, Patti, does happen to work for the Pappajohn Center at NIACC.  NorthIowaToday.com asked Tornquist if this is a conflict of interest and if he would abstain from voting on the Micro Enterprise Program.  No immediate answer was given.  City Administrator Brent Trout said Monday that regarding conflicts of interest and votes by city council members, it “is totally up to them.”

UPDATE: It has come to our attention that a relative of At-Large City Councilman Alex Kuhn also has a close relationship with NIACC. Kuhn’s mother, Denise Kuhn of Charles City, sits on the NIACC Foundation Board of Directors. NorthIowaToday.com asked Kuhn if this presents him with a conflict of interest and if he will be voting on the Micro Enterprise Program. We will report if Kuhn and Tornquist offer an answer.