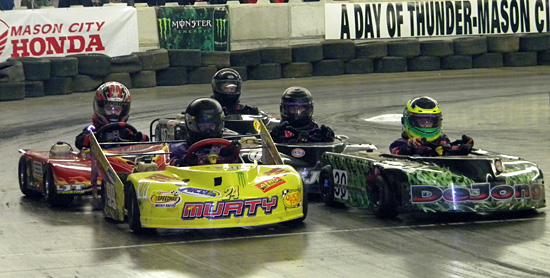 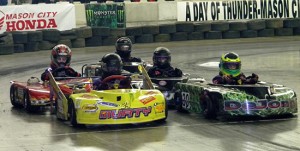 MASON CITY – In the All Seasons Center at the North Iowa Fairgrounds, Terrance Prochaska put together a winning combination of around 150 Iowa Karts, Quads and Bikes for the “Day of Thunder on Syrup” racing event. This is the first time that these type of races have been held at the North Iowa Fairgrounds.  It gets its name because of a thin layer of Coca-Cola syrup that is on the racing surface.

The all-day event started at Saturday afternoon, with practices on Friday and Saturday morning.  At times, the All Seasons Center was packed full, with people being asked to get closer to allow more people in.  Other times, between races and later in the day, there was room to breath.

The races themselves were exciting.  The track having 86 foot straits and 25 foot corners made the races go very fast.  All ages were fun to watch.  Many people in the crowd said that they would be back for next “Day of Thunder on the Syrup” race event to be held February 3rd and 4th.

There was a race event called the Buddy Race.  Two racers made up a team, and each lap they had to stop and switch drivers.  There apparently was a so-called cheater in the bunch, so the race had to be done over.  No cheating was ever proven, it was just done to be fair.

With the day being so nice, all doors were able to be open, letting exhaust and gas fumes out.  The noise level was high, but bearable, plus earplugs were there to be purchased.  Cory Jurgena was there with his grandson, in full ear gear.

Kabrick Distributing was a big sponsor of the event.  The Monster Girls rode around the track on a golf cart, before the Features, throwing out Monster Stickers and candy.  The winners of the features also got their pictures taken with the Monster Girls and the checkered flag while holding a Monster and their trophy.

The few of the Dames of Anarchy derby girls were out on their rollerskates, getting a collection for Toni Torres’s family.  Toni, A Dames of Anarchy team member, lost her life New Year’s Eve in a rollerstaking accident.  Many people were generous and gave to the fund.

Besides the All Seasons Center, two other buildings were being used for the pit crew to work on the karts, bikes and quads beween races.