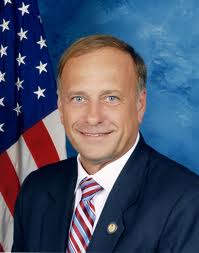 Washington, DC- Congressman Steve King (R-IA) released the following statement today after introducing the “No Hungry Kids Act” with original co-sponsor Congressman Tim Huelskamp (R-KS). The bill was introduced in response to recently released school lunch standards from United State Department of Agriculture (USDA) that have left children around the nation hungry during their school day due to extreme calorie rationing. The “No Hungry Kids Act” repeals the USDA rule that created the new standards, prohibits the USDA’s upper caloric limits, and will protect rights of parents to send their children to school with the foods of their choice.

“For the first time in history, the USDA has set a calorie limit on school lunches,” said King. “The goal of the school lunch program was- and is- to insure students receive enough nutrition to be healthy and to learn. The misguided nanny state, as advanced by Michelle Obama’s “Healthy and Hunger Free Kids Act,” was interpreted by Secretary Vilsack to be a directive that, because some kids are overweight, he would put every child on a diet. Parents know that their kids deserve all of the healthy and nutritious food they want.”

“The goal of the school lunch program is supposed to be feeding children, not filling the trash cans with uneaten food,” said Huelskamp. “The USDA’s new school lunch guidelines are a perfect example of what is wrong with government: misguided inputs, tremendous waste, and unaccomplished goals. Thanks to the Nutrition Nannies at the USDA, America’s children are going hungry at school.”

Washington, DC – Congressman Steve King released the following statement regarding the EPA’s announcement today that it will approve an expansion of the the 2013 Bio-diesel Renewable Fuel Standard requirement to 1.28 Billion gallons. The current RFS regulation for Bio-diesel was set at 1 Billion gallons for 2013 with the flexibility that higher allowances would be granted if the industry could present a case for a need for such an increase.