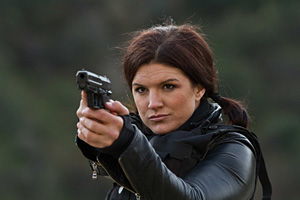 LOS ANGELES — It’s been one year since Gina Carano fired a gun, but you wouldn’t know it watching her shoot one. The former mixed martial arts champion, who will make her feature film debut in the Steven Soderbergh action movie “Haywire,” is engaged in lively target practice with Aaron Cohen, an ex-Israeli special ops fighter who served as her tactical training coach on the film. Everything from Carano’s crouched stance to the steely glint in her dark-brown eyes suggests that firing 9-millimeter pistols at close range is second nature to this 29-year-old extreme athlete.

“How’s my form?” she asks as she fires multiple bullets into the chest of the paper target affixed to a wooden board 30 feet away.

“Wow,” says Carano, who earlier emerged from a black SUV at the dusty gun range in full movie-star attire — black leather jacket, lacy top, high-heeled boots — only to quickly transform into a fighter in cargo pants and sneakers, her hair pulled back in two low pigtails.

Geared up in hearing-protection headphones and a tactical fighting vest, she walks up to the target to poke at her center chest hits. “It’s just like riding a bicycle.”

Carano and Cohen are at the Burro Canyon Shooting Park at the base of the Angeles Crest Highway showing off the skills Carano learned during Cohen’s six-week intensive tactical training course designed to transform Carano from mixed martial arts fighter into the role of Mallory Kane, a black-ops private contractor who is double-crossed by her employers.

The movie, which opens Jan. 20, is another one of Soderbergh’s filmic experiments: This time the Academy Award-winning director reimagines the spy genre within the confines of physical realism. Rather than employ movie technology audiences have grown accustomed to — stunt doubles, quick film cuts, wire work — Soderbergh opted to approach the genre with a real-life fighter as his lead and a real-life elite soldier as his technical adviser. He then surrounded Carano with such actors as Michael Fassbender, Michael Douglas and Ewan McGregor.

The result is a high-paced action film with kinetic fight scenes that stand apart from those in other films because they look so real.

“I really wanted to make a spy movie that wasn’t a fantasy, in which the scale of it was very human,” said Soderbergh. “Then I saw Gina on TV, and I thought, ‘She is (James) Bond,’ just in a different context.”

With little more than that idea in his head, Soderbergh first arranged to meet Carano in summer 2009, one week after Carano lost her first mixed martial arts fight against Brazilian fighter Cristiane “Cyborg” Santos. Sporting a black eye and a downtrodden attitude, Carano reluctantly picked up Soderbergh from a train station in San Diego, where she was living at the time.

“I didn’t want to talk to anybody, see anybody,” said Carano, who was surprised when their meeting turned into a four-hour lunch. “We had this normal conversation. He was feeling me out. He wanted to know what kind of person I am. And I didn’t have any preconceived notions of him because I didn’t really know what a director really was.”

Soderbergh knew Carano mainly from her YouTube fights, where with her hair pulled back in tight cornrowed braids, she relentlessly punches and kicks her opponents, often breaking their noses and knocking them out. The director wanted to see if there was more to her than the intense brutality she conveys during her bouts. He was hoping for something soft, feminine, maybe even vulnerable.

Soderbergh, who previously cast adult film star Sasha Grey as his leading lady in “The Girlfriend Experience,” knew the secret to working with untrained actors is to capitalize on their true character.

“The more you play to the essence of their personality, the more success you are going to have,” said Soderbergh. “I found her genuine, sincere and very female. She was in some respects very girly, which I thought was great. Even early on, I was hoping to have her play both sides of this, a girl in a beautiful dress who could also chase a guy down on foot. I had no doubts about that after I talked to her.”

For Carano, the Soderbergh interaction couldn’t have come at a better time. After being heralded as the face of mixed martial arts, Carano had suffered a significant professional setback, losing in the first round to Cyborg in July 2009. At a crossroads with her career, the chance to be a lead in a major motion picture from a highly regarded director was an opportunity she couldn’t turn down.

“I’ve always heard these stories about Hollywood and what you have to do to be in Hollywood but (Steven) was so professional and appropriate and I thought, ‘Absolutely, I’ll make a movie with you,’” said Carano.

A physical kid growing up in Las Vegas, where she attended a small Christian school, Carano never considered herself a violent person, but throughout her life, fights kept coming her way. Whether it was the guys who jumped her in high school or the basketball opponent who charged her over a jump ball during a game, Carano may not have instigated the altercations, but she wasn’t ever willing to back down from them. Perhaps it was a trait she inherited from her father, former Dallas Cowboys quarterback Glenn Carano.

“My dad and mom always taught me to stick up for myself so it’s kinda in my blood,” she said.

Carano started training in the sport of muay Thai at age 21, at the suggestion of her then-boyfriend fighter Kevin Ross.

The striking brunet — whose profile should be on the head of a coin, according to Soderbergh — recently had abandoned a couple of scholarship opportunities to play collegiate basketball and softball, opting to stay close to home to help her struggling sister and study psychology at the University of Nevada, Las Vegas.

Lost without a physical release in her life, muay Thai served as a welcome distraction.

“I started training, and five months later I found myself in a gym in San Francisco getting ready to fight a girl. From that moment on, I was completely addicted,” said Carano as gunfire erupted from the nearby range.