New policy from U.S. military will allow illegals to serve 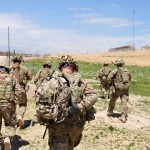 WASHINGTON – The U.S. Department of Defense announced a new policy Thursday that would allow illegal aliens to join and serve in the military.

The program — known as Military Accessions Vital to National Interest, or MAVNI — will be open to immigrants without a proper visa if they came to the U.S. with their parents before age 16. More specifically, they must be approved under a 2012 Obama administration policy known as Deferred Action for Child Arrivals, or DACA. These persons are sometimes known as “Dreamers”. Iowa congressman Steve King has railed against the Dreamers, and wants the program defunded and the Dreamers out.

However, as the Military Times explained, President Obama has vowed to aggressively use his presidential authority to change the way immigration policies are carried out, and the new DoD policy may be the first phase of a broader governmentwide effort to ease pressure on immigrants and create new paths to citizenship.

Estimates suggest between 1.2 million and 2.1 million children, teenagers and young adults in the U.S. have no legal immigration status but meet the criteria for the DACA program. Those targeted by recruiters under the MAVNI program likely will be immigrants with language skills critical to national security, such as Arabic, Chinese, Pashto or Persian.  The Pentagon program is capped at 1,500 recruits per year.

On average, the military recruits about 5,000 noncitizens each year, nearly all of them permanent U.S. residents, or so-called “green card” holders.

12 Responses to New policy from U.S. military will allow illegals to serve