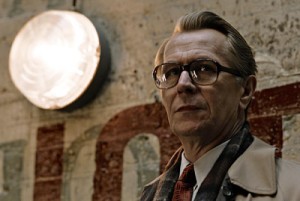 CHICAGO — A quarter century ago, a South London-bred actor named Gary Oldman ignited the role of Sid Vicious of The Sex Pistols in director Alex Cox’s “Sid and Nancy.” And that was that. He was It. Oldman announced himself as a fearless, feral yet technically fastidious young firebrand, ready for anything.

Oldman went about proving as much in good roles and silly ones, portraying a handful of sympathetic men and a much larger fistful of sleazeballs and sociopaths. Now, having weathered cool streaks, an extensive marital resume and a successful battle with alcoholism, the 53-year-old Oldman finds himself on tour promoting a project for which, he told me the other day, he has waited “my entire expletive life.” (He didn’t say “expletive,” but you get it.)

What is it about taciturn spymaster George Smiley, the sphinxlike center of John le Carre’s “Tinker, Tailor, Soldier, Spy,” that attracted Oldman? One word: Less.

“Onstage,” he said quietly by a window in his hotel room, “I’ve played parts where you don’t climb the scenery or bounce off the walls.” Six months out of drama school, Oldman joined the company of the Citizens Theatre in Glasgow. It was quite a group:

Ciaran Hinds, Rupert Everett, Mark Rylance, Robbie Coltrane. If you don’t know the names, you surely know the faces. Hinds plays one of Smiley’s dodgy cohorts in director Tomas Alfredson’s spectacularly tight-lipped adaptation of the le Carre novel. The film is dense but beautifully made.

Smiley, Oldman said, allows an actor to “run a scene, control a scene from a very, very passive position. It’s nice not to physicalize. I call it a sitting-down part.”

Oldman has been lucky lately: He has contributed widely respected supporting turns in two hugely successful franchises, playing Sirius Black in the recently concluded “Harry Potter” series, and adding a touch of rumpled humanity to Commissioner Gordon in Christopher Nolan’s “Batman” trilogy. The latest in that series, “The Dark Knight Rises,” arrives next year. “Batman Begins” and “The Dark Knight” were shot partly in Chicago.

“We got in last night,” Oldman says, “and it felt like Gotham. It’s Gotham to me, this city. I remember I went with my girlfriend at the time to watch ‘The Sound of Music’ in Grant Park. We put a nice little picnic basket together. I think fondly of Chicago.”

Years before his own film debut, Oldman thought fondly — as did millions of others — of the TV miniseries of “Tinker, Tailor” starring Alec Guinness. “You’d arrange your social calendar around that one hour a week when you’d watch it,” he said. “Long before VCRs, this was.”

Oldman declined to revisit it in preparation for his own take on Smiley. Guinness, he said, was an early acting hero, mainly from the Ealing comedies. Who needs a hero in your head when you’re trying to find your own way into an elusive character?

What Oldman says about Guinness, a lot of other performers say about Oldman. The list of movie stars who revere Oldman’s versatility and bravery is a long one, including Brad Pitt, Ryan Gosling, Tom Hardy, “Tinker, Tailor” co-star Colin Firth (who claimed Oldman is “a candidate for the title of ‘greatest living actor’”) and Ralph Fiennes, who called him, simply, “a genius.”

For much of his life Oldman quenched his actor’s drive and thirst with alcohol. Back in 1991, visiting Dallas for a story on the filming of Oliver Stone’s “JFK,” I encountered Oldman (who played Lee Harvey Oswald) knocking ‘em back at the bar at the Stoneleigh Hotel. Two sentences into our brief conversation a couple of things were clear. One: He and Brian Doyle-Murray (who played Jack Ruby) were not slowing down for anyone. And two: Oldman had read many, many more JFK conspiracy theory books than my own measly six. “Six?” he said, accusingly. “Six? You’ve only scratched the surface, then.”

I mentioned this long-ago 20-second conversation, and Oldman’s eyes widened. “The Stoneleigh … yes! The Stoneleigh. ‘Where every room’s a suite.’ I remember the Stoneleigh.” He smiled, a little sheepishly. “I used to be a walking encyclopedia on that conspiracy stuff.” In ‘91, Oldman had yet to grapple with his addiction, and he was in the middle of his second marriage, the one to Uma Thurman.

Since 2008 Oldman has been in his fourth marriage, this one to singer Alexandra Edenborough. The actor is father to three sons from previous marriages, and makes his home in LA. “It’s quiet,” he says. “I have my hidey-hole.” And then, sounding very much like a le Carre mole, he adds: “I tend to hide away.”
———
Michael Phillips: mjphillips@tribune.com
___
©2011 the Chicago Tribune