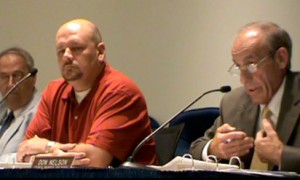 MASON CITY – City Councilman Don Nelson has again called for a referendum on a proposed multi-purpose arena for Mason City should the issue get that far.

Nelson, drawing comparisons to Mason City’s mulling of an arena project, cited a Des Moines Register newspaper article from July 31st, 2011 that says Pleasant Hill, a Des Moines suburb, has had two referendums on a sports complex and was to hold another vote this past Tuesday. That vote was held, and voters for a third time rejected the project, as they did in 2009 and 2010.

According to the Des Moines Register article, “On the ballot was financing for a $10 million, 65-acre first phase of a sports complex. It would have included four baseball fields and five soccer fields.”

The proposal required 60 per cent approval from voters in order to pass and the item failed. Pleasant Hill Mayor Mike Richardson told the Register the outcome was “incredibly disappointing.”

Richardson went on to say “I don’t know if this is because of the economy or if it’s a certain group of people who want to keep Pleasant Hill the way it is.” That line may sound familiar, as there is talk around Mason City that some city leaders and even some citizens want Mason City to stay small, and even work toward thwarting growth and progress.

It has been made clear at City Council meetings by Mayor Eric Bookmeyer and City Administrator Brent Trout that any proposed project in Mason City that uses $700,000 or more in general obligation bonds must go before the voters in order to move forward.

Nelson doesn’t think the multi-purpose arena project, which has been talked about for the downtown Mason City area, possibly southwest of Southbridge Mall, is a good idea. “Mason City has no growth in our youth population, quite the contrary, decreasing,” he told NorthIowaToday.com.

Nelson and fellow Counilman Jeff Marsters feel that other city leaders are laying the groundwork for the project already. This was evidenced at the July 19th City Council meeting when TIF (tax increment financing, an elaborate method to use future gains in taxes to finance current improvements or projects) districts in Mason City were consolidated. Marsters said that consolidating TIF districts was never mentioned until the issue of a multi-purpose arena was brought up, and that the TIF consolidation was about “getting enough TIF revenue to fund such a project.” Nelson echoed Marsters words.

Councilman Scott Tornquist called Marster’s and Nelson’s allegations a “gross misrepresentation of the truth” and said the issue has been brought up before.

City Administrator Brent Trout admitted that the city could not fund a multi-purpose center project with the current set up of TIF districts in Mason City. He said TIF optimization would help the project should the city decide to move forward, but TIF would not be able to fund the whole project.

The TIF consolidation proposal was then passed on a 6-0 vote.

Watch a video where the City Council debates the TIF consolidation plan and how future funds might be used for a multi-purpose arena: