The Cyclones had a lead of as many as 14 points in the second half, but saw that lead erased in the fourth quarter. However, Emily Ryan stepped up with a step back 3-pointer with 2:03 to play to put ISU ahead, as the Cyclone defense stepped up to hold the Panthers scoreless over the last 2:17 of the contest.

Iowa State was led by 26 points and nine rebounds from Ashley Joens, who set a new career field goals record, now sitting at 795 buckets in her career. She was joined in double figures by the rest of the starting lineup, with Stephanie Soares getting 23 points on 9-of-11 shooting, 14 from Ryan, 12 from Denae Fritz and 10 by Lexi Donarski.

How It Happened
When the Panthers were able to shoot, they were strong, making seven of nine field goal attempts in the first 10 minutes, but the home team was hampered by seven first-quarter turnovers. The Cyclones were able to take advantage, after Ashley Joens was responsible for the Cyclones’ first three field goals, Stephanie Soares stepped up late, including a driving lay-in in the final seconds of the period to give ISU a 23-18 edge.

While UNI was able to clean up their turnover issue, they were unable to keep up with the hot-shooting Cyclones, who went 9-of-15 (60 percent) from the field in the second period, an effort which included five 3-pointers as the Cyclones built their advantage into double figures. Joens had eight points in the period, including a 3-pointer with 2:33 left in the half that put her into the record books with the most field goals in program history.

Joens continued to guide the Cyclone effort, finding another 11 points in the third quarter for ISU, as she helped ISU battle through a physical contest, with the refs allowing both teams to play through some contact.

The Cyclones found a difficult time to hit a scoring drought in the fourth quarter, as UNI went on an 13-0 run to level the scores again at 76-76 with 4:52 to go. Grace Boffeli gave the Panthers the lead at the next possession, but Donarski rimmed in a 3-pointer and ISU followed that with a fast-break Soares layup to get back ahead 81-78.

UNI got back ahead with a Maya McDermott lay-in with 2:17 to play to make it 85-83, but Ryan stepped up the next possession with a 3-pointer to put ISU back ahead. The Cyclone defense did the work from there, holding UNI scoreless on its final three possessions.

Player of the Game
Ashley Joens. While she owns another career school record via surpassing Angie Welle’s previous field goals mark at 791, it was a small footnote in a performance that was crucial to the victory, finishing with 26 point on 9-of-18 shooting, including six 3-pointers and a team-high nine rebounds.

Up Next
Iowa State returns to Hilton Coliseum on Sunday to take on Columbia. Tip will be at 11 a.m. on Big 12 Now. Tickets are available through the Iowa State Athletics Ticket Office. 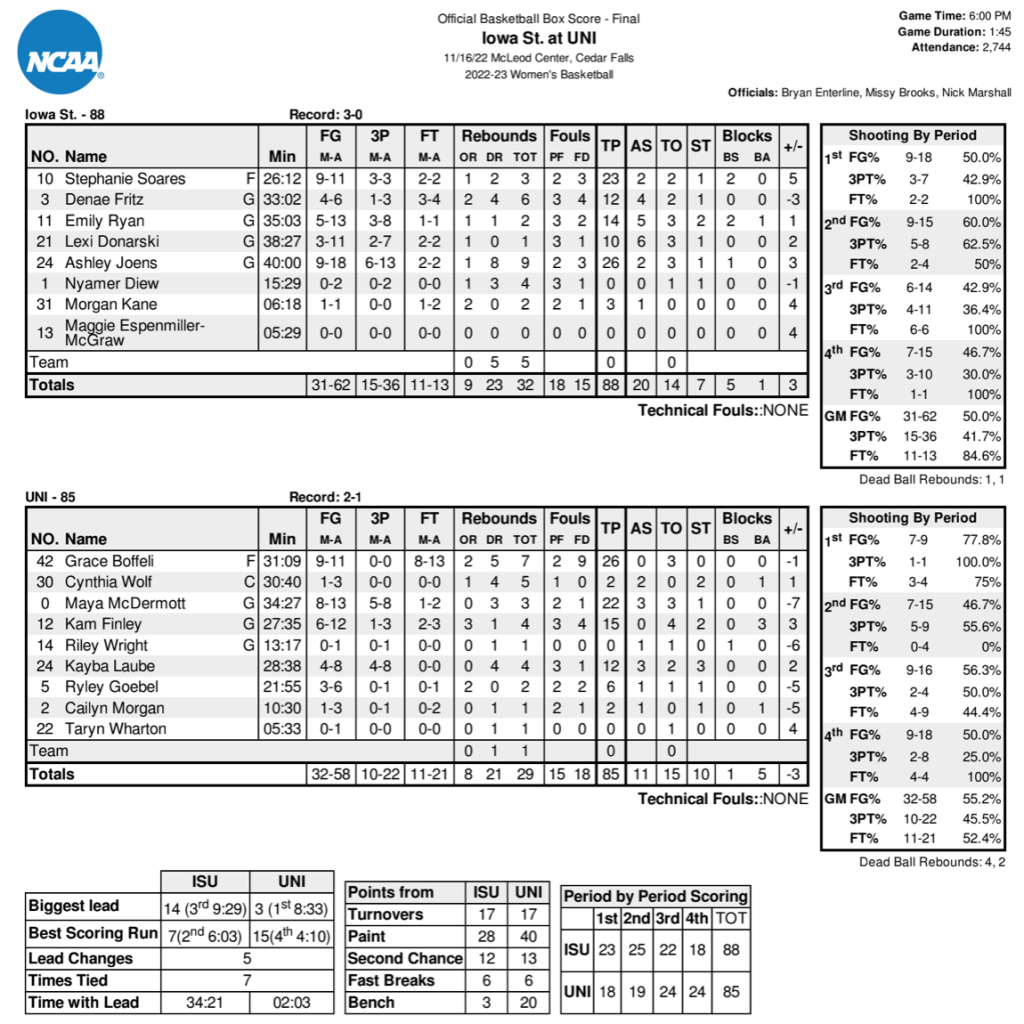