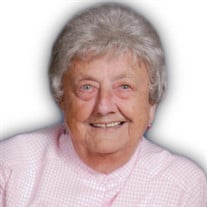 Ginny was Born June 17, 1922 Chicago, Illinois to Harry and Helen Camel. Her father died March 30, 1922 three months before she was born.

She attended Warren Grammar School , Bowen High School and two years at Bryant Stratton Business College. She was employed as a reporter and then society editor of the Daily Calumet, a southside Chicago newspaper and then worked as a secretary for the Illinois Central Railroad.

Ginny met the love of her life, Willard “Bill” Egli of Mason, Iowa, a Navy Veteran awaiting discharge, at a USO dance at Navy Pier in Chicago. They were married on September 18, 1946. The couple later had three children, Harry, Sandra and Thomas.

Both Bill and Ginny were active members in Holy Family Catholic Church. Ginny was a member of St. Elizabeth Seton Circle and President of the Mason City Women’s Club for two years. In her earlier years, she was active in both boy and girl scouts and was Sandi’s first Brownie Leader. She was active in many other activities in the Community. Ginny enjoyed dancing, reading, playing Bridge, helping others, as well as putting puzzles together on the computer.