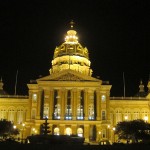 DES MOINES – A liberal Iowa political group is furious that Republicans refuse to pass allowable growth for Iowa schools in the 2015 school year.

Progress Iowa said Thursday that twenty eight days have passed since Republicans in the Iowa House of Representatives violated their statutory responsibility to pass allowable growth funding for public schools in the 2015 school year.

“For twenty eight days, House Republicans have broken the law by not funding our schools,” said Matt Sinovic, executive director of Progress Iowa. “Blocking another debate on school funding was just the latest example of their disregard for the law and Iowa’s schoolchildren. Iowa spends $1,500 less than the national average per pupil on public education, so our schools need these resources now more than ever. We deserve to know why Speaker Paulsen, Majority Leader Upmeyer, and House Republicans continue to break the law, and why they believe a child in Iowa is worth $1,500 less than a child anywhere else in America.”

The deadline to increase funding for the 2015 school year was Thursday, February 13th. Since that date the House has refused to debate any legislation to increase school funding, including one proposal passed by the Senate that would increase K-12 budgets by six percent. Yesterday the House again rejected a debate on an increase in school funding passed by the Senate well before the February 13th deadline.

Also yesterday, the Senate Standing Education Committee amended and passed House File 2194 to keep the current law requiring school funding to be set every year within 30 days of the submission of the Governor’s budget. In addition, school funding for the 2015 school year was incorporated into the bill at the same six percent level which the Iowa Senate passed earlier this session within the legal requirements of the law.

“98 percent of school administrators oppose the House Republicans plan to wait, as Iowa schools are woefully underfunded,” Progress Iowa said. “Iowa schools are funded at $1,500 less per pupil than the national average, and an increasing number of students attending Iowa public schools live in or on the brink of poverty.”