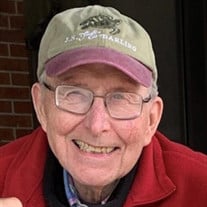 The fifth of six children, Gene was born on April 10, 1934 in East St. Louis, Illinois to Emil G. and Edna (Spencer) Kuehn. He graduated from East St. Louis High School, Washington University in St. Louis (in three years), and the University of Illinois, Chicago Medical School.

He married Nancy Ann Bucknell and just recently had a family gathering celebrating their 65th wedding anniversary. To this union three children were born, Michael, Elizabeth, and David.

Gene served in the Army at Ft. Wolters in Mineral Wells, Texas where he was an Obstetrician/Gynecologist at Beech Army Hospital. The family moved to Mason City, Iowa in 1965. Dr. Kuehn worked at Park Clinic before opening his private practice in 1972. He soon formed Associates in Obstetrics and Gynecology and brought many cutting edge medical technologies to his practice and Mercy Hospital. He even held sex education classes in the late 1960s where each night in Mason City, they expected a small group of 10 to show up and over 200 people gathered. He continued these classes around the state of Iowa. He retired in 2000 after delivering nearly 12,000 babies over his career.

Gene had a love of music and the outdoors and enjoyed gardening, canoeing in the boundary waters, camping with family and friends, and sailing with good friend John Lundberg.

Gene was an Eagle Scout and served as a scout master. Over the years, he was active in Kiwanis, Men’s Garden Club, Una Vocis, County Medical Society, State Medical groups, and a long time member of First Presbyterian Church in Mason City where he served as an elder and sang in the choir.

For those unable to attend the service will be livestreamed off the Hogan-Bremer-Moore Colonial Chapel Facebook page.