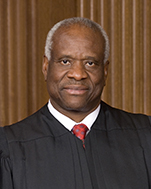 WASHINGTON, D.C. – Justice Clarence Thomas was admitted to Sibley Memorial Hospital in Washington, D.C., on Friday evening after experiencing flu-like symptoms, and he may still be in a hospital, as his wife comes under scrutiny for ties to the treacherous deeds of January 6, 2021.

On March 20, the Supreme Court released a statement saying Clarence “Thomas underwent tests, was diagnosed with an infection, and is being treated with intravenous antibiotics. His symptoms are abating, he is resting comfortably, and he expects to be released from the hospital in a day or two. Justice Thomas will participate in the consideration and discussion of any cases for which he is not present on the basis of the briefs, transcripts, and audio of the oral arguments.”

However, today, the Associated Press and others report, “The Supreme Court declined to say Wednesday whether 73-year-old Justice Clarence Thomas remains in the hospital, though he had been expected to be released by Tuesday evening.”

President George H.W. Bush nominated Thomas, who is 73 years old, as an Associate Justice of the Supreme Court and he took his seat October 23, 1991. He married Virginia Lamp on May 30, 1987.

Thomas’ hospitalization comes as more and more scrutiny is laid upon his wife, who reportedly is a “conservative activist” who attended the deadly January 6 insurrection or rally in Washington, where traitors tried to stop Joe Biden from becoming President.