AMES – Emily Ryan’s clutch shooting helped Iowa State to a record-tying victory and a spot in the second round of the NCAA women’s basketball tournament.

Ryan scored 11 of her 20 points in the final 5:48 to lead third-seeded ISU past No. 14 seed UT Arlington 78-71 in a first-round game at Hilton Coliseum on Friday night.

The Cyclones improve to 27-6, matching the program record for victories, and will play sixth-seeded Georgia in the next round on Sunday. UTA, the Sun Belt Conference tournament champion, finishes 20-8.

It was just the third NCAA tournament appearance for the Lady Mavericks and they gave the Cyclones all they could handle. UTA led by as many as 12 points in the first half and ISU did not take the lead for good until Ryan drove for a basket to put the Cyclones up 66-64 with 4:59 left.

Ashley Joens led Iowa State with a season-high 36 points and 15 rebounds, her 17th double-double of the season. Ryan complemented her scoring with six assists – the only assists the Cyclones recorded in the game – three rebounds and a steal.

Starr Jacobs, the Sun Belt player of the year, led UTA with 19 points, but the Cyclones made her work for them. She needed 15 shots to make her six field goals and fouled out late in the game.

After each team made a free throw, Ryan delivered again, stepping up to the 3-point arc and knocking down another shot for 70-65 lead. After a UTA basket, Ryan found Joens in the left corner and Joens splashed a 3 to make it 73-67.

Ryan completed her late surge with another driving layup to make it 75-69 and that was enough for the Cyclones to hold on.

ISU overcame some unusually shaky free throw shooting – 15-of-26 – and went 1-for-9 from 3-point range in the first half before heating up in the final two quarters. The Cyclones finished 7-for-20 from deep and shot 43 percent overall.

UTA made five of its first six 3-point shots in building a 37-25 lead as the Cyclones struggled on the perimeter and failed to get stops on the defensive end.

ISU did a good job attacking the interior with Jones, Ryan and Donarski, but did not convert often enough to keep pace with the Lady Mavs, who were shooting 60 percent after the game’s first 12 minutes and finished the half at 50 percent.

The Cyclones missed their first eight 3-point shots and did not score from beyond the arc until Joens hit a step-back 3 with 1:17 left in the opening half. It capped a 10-2 run that sliced the lead to 39-35 and got the crowd back into the game.
But ISU missed its final two shots of the half and Jacobs’ two free throws gave UTA a 41-35 halftime lead.

The Cyclones did a better job corralling the UTA shooters in the second half, holding the Lady Mavs to 2-for-9 from beyond the arc and 12-for-32 overall in the final two quarters. 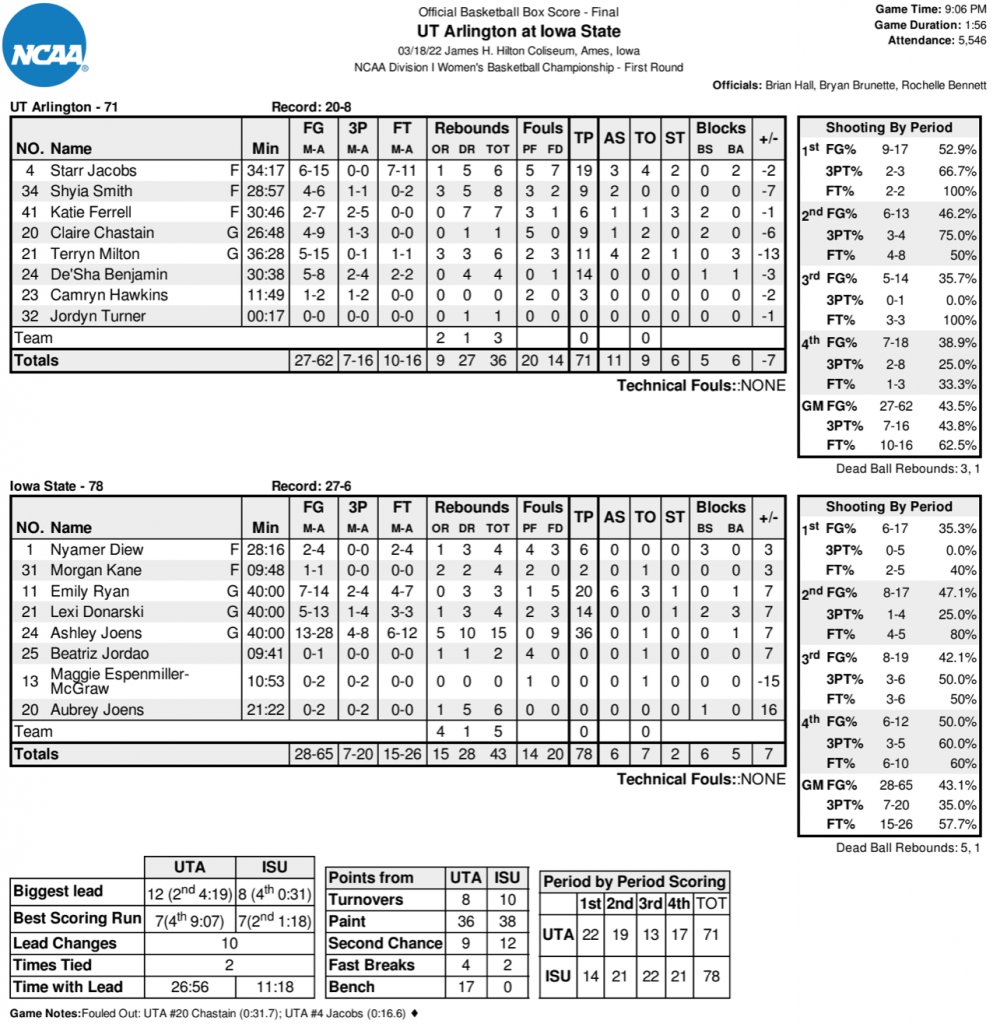