It was a complete game from start to finish for the Panthers in taking down the projected MVC favorite Lady Bears. UNI had four starters in double figures, including a second double-double for forward Grace Boffeli in the win. With 74 points, the Panthers put up the highest-scoring margin against Missouri State this season.

“Tonight, was a terrific team win,” said Head Coach Tanya Warren. “I thought it really started on the defensive end for us. I thought we did a terrific job of finishing defensive plays by rebounding the basketball. One of our keys was to win the rebounding battle or keep it close. And I think we won it by four. We had four players in double figures and I thought we did a terrific job of getting to the free-throw line. Just a terrific team win and I’m extremely proud of them.”

UNI was hot out of the gate, making up for the Lady Bears’ first basket with an and-1 play from guard Emerson Green. The Panthers wouldn’t lose the lead for the rest of the game as they went on a six-point run after Missouri State tied the game up on a free throw two minutes into the first. UNI would continue to have short runs throughout the quarter to get out to a 13-point lead in the final two minutes. The Lady Bears would make their last two shots of the quarter to bring the margin down to 9-points going into the second.

The Panthers would get the first shot of the second quarter as well with a jump shot from forward Bre Gunnels only 15 seconds in. The teams would then trade baskets for the next three minutes until Missouri State went on a brief three-point run. But UNI would be able to get back their double-digit lead, racking it up to 16 by the final two and a half minutes of the half. The Lady Bears would slightly close the gap over the next minute but would be down going into halftime with the Panthers on top 39-26.

Gunnels would again get the first points of the third as she headed to the line in the first 20 seconds, making both of her free throws. UNI would get out to their largest lead of the night in the third at 17 points within two minutes as Boffeli made a contested layup. Missouri State would call a timeout in response and get a basket, but the Panthers would answer with more free throws. Lady Bear guard Mya Bhinhar would go on a four-point run of her own to close the gap to 12. UNI would answer again with more free throws from guard Karli Rucker. The Panthers would be able to push the lead back out to 17 by the end of the quarter.

With Missouri State in foul trouble by the fourth quarter, UNI would find themselves at the line to begin scoring in the final frame. Gunnels made one of two free throws before the Lady Bears would get a strong three-pointer from guard Brice Calip. It’d be back and forth until guard Sara McCullough would get a big and-1 play in the third minute to put the Panthers back up by 15.

Missouri State would cut the lead down by four until UNI returned to the line with Boffeli making both shots. But the Lady Bears would go on a six-point run, taking the Panther lead down to single digits. Missouri State would keep it close, getting the margin down to 6 with just over a minute to go. But UNI would respond, forcing the Lady Bears to foul the Panthers to the line. UNI would close out the game at the line, snapping Missouri State’s 21-game conference win streak with a big 74-65 win.

On the offensive side of the ball, the Panthers had four players in double figures. Leading the way was Rucker with 19 points, followed closely by Green with 17. Also, in double figures were forwards Gunnels and Boffeli. Boffeli also had another double-double, pulling down 14 boards in 28 minutes of play. Of UNI’s five steals, Emerson Green would have three, her figure on the season so far.

UP NEXT:
The Panthers take on the streaking Southern Illinois Salukis this Saturday. Southern Illinois has won all 3 of their MVC games this season, including a close battle against Drake on Thursday. The Salukis will come to the McLeod Center on Jan. 15 with tipoff at 2 p.m. 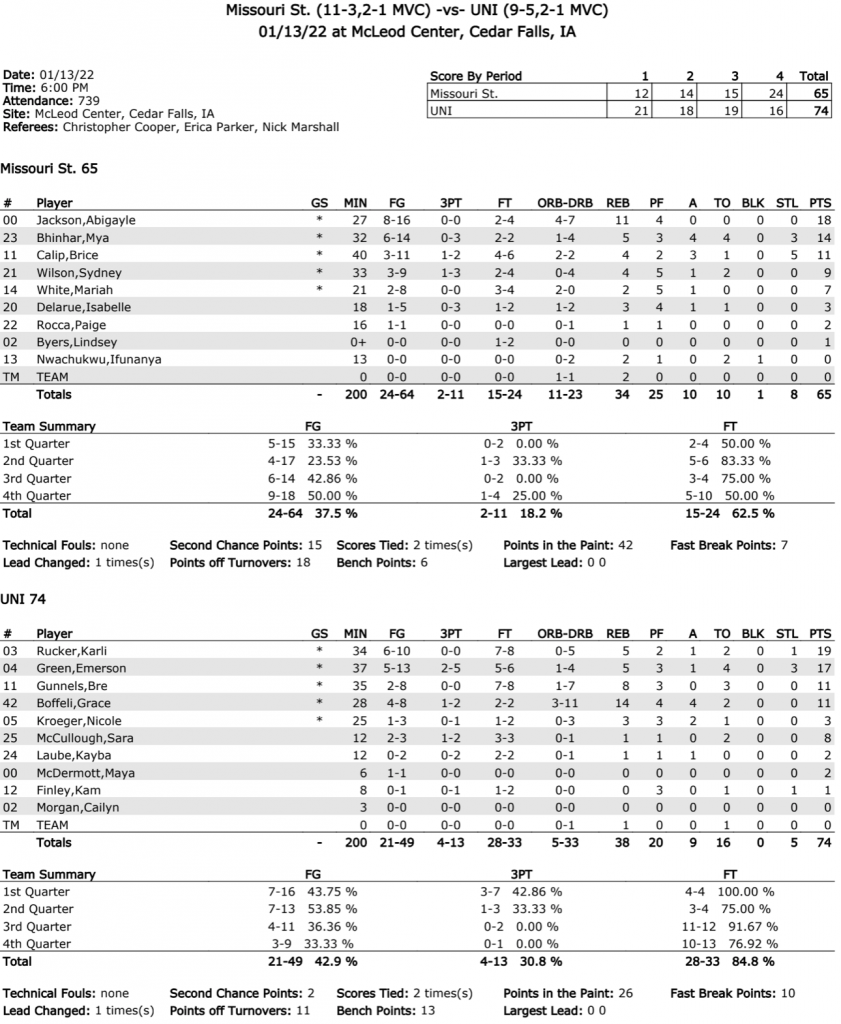