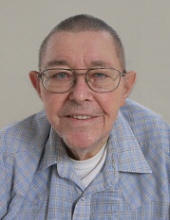 Ivan Otto Wayne Anderson was born on 13th May 1929 (as he would say it to all who asked his birthdate) in Charles City and passed away on October 11th, 2021 in Charles City. He grew up running around town and playing in the river with friends and even made two diving helmets for diving in the Cedar River. He would tell the story of being hired to dive for a lost wallet and finding it after hours of scouring the river bottom. Ivan and friends also constructed a hot air balloon and actually were brave enough to take flight with it. Along with a friend, he opened a camera shop (his dream job) in the basement of a store in the 200 block of North Main Street his senior year in high school and his freshman year of college. Growing up, he loved to race sports cars and owned many of them throughout the years. He belonged to some national car clubs and would drive around the country to rallies. He once traded a prized sports car, an MG, for a Hasselblad camera which was a joy of his to use. He took a camera repair class later on in life to continue his education into his beloved hobby.

Ivan was accepted into the Army ROTC program and attended Iowa State University, graduating in 1952. He was then off to the Korean Conflict for a 14 month deployment stationed out of Ft Belvoir by Washington DC and was attached to the 434th engineering construction battalion. He achieved the rank of captain. Even after being there, he loved to watch MASH in the evenings with his children. Ivan returned to Charles City and accepted a job at the Oliver Tractor Company and worked there for 38 years in the engineering and testing department. He enjoyed his time there and made many lifelong friends. One of these meetings was with Helen Gertrude Fantz who was working across the hall in an all glass office. He made excuses to visit that particular office often and they wed on December 1, 1957.

They moved with Oliver for tractor testing to Bakersfield, California and Lubbock, Texas. After their move back to Charles City, he and Helen could not find a suitable home so he started construction in 1959 himself where he would raise his family. He and Helen had four boys, Brian, Mark, Hugh and Paul. He was a lifelong dreamer and loved to invent and build. He made many fond memories for his children with forts, hybrid trikes, and other fun and exciting toys.

After his retirement from White Farm Tractor in 1990, he worked as a janitor at the Floyd County Memorial Hospital. He worked second shift and loved the people he would meet during his years there. One of his biggest enjoyments later in life was going to rummage sales around the area. He would write his list out to make it ‘flow best’ as he left the house. This allowed him to ‘collect’ many different things through his lifetime. He had many buildings full of his collections. He was a life-long member of the Wesleyan Church in town and was a fixture at a local dominos group on Sunday nights.
In death, he followed in the footsteps of his wife, Helen, and donated his body to Des Moines University to further medical research.

If you would wish to send cards to the family, please include a short memory of something he did or reminded you of in life. Send these to 906 Clinton Street, Charles City, Iowa, 50616. A memorial service will be held at a later date.