INDIVIDUAL NOTES
RB Tyler Goodson rushed 12 times for 68 yards. He has 1,986 career rushing yards (16th all-time). He is 14 yards shy of becoming the 16th player in program history to rush for 2,000 yards in a career.

DB Terry Roberts made his first career start and had a career-high five tackles. LB Seth Benson had a game-high 12 tackles, one short of his career high.

Iowa has played 29 straight games without surrendering 25 points, the longest streak in the nation among Power 5 teams. Purdue scored 24 points, the most by an Iowa opponent since the 2020 season opener (at Purdue).

UP NEXT
The Hawkeyes are idle next week and return to action Oct. 30 at Wisconsin. Kickoff for that game is 11 a.m. (CT). 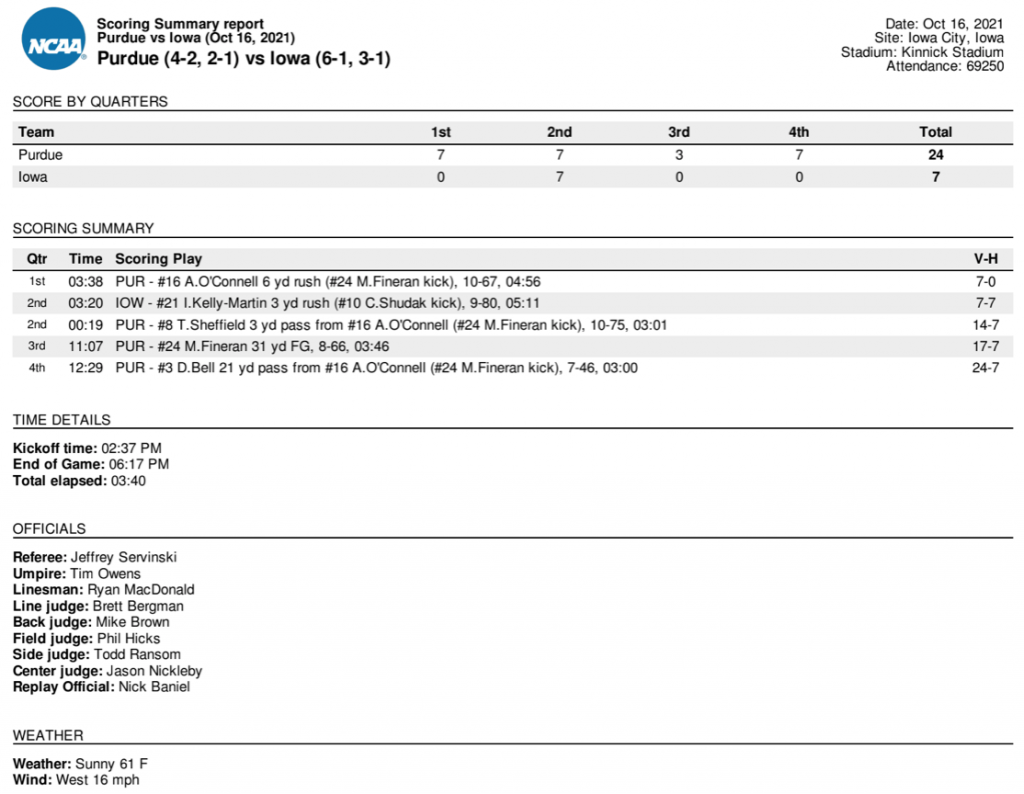 COACH FERENTZ: A really disappointing and difficult day for our football team and certainly our fans too. They were great. Appreciate them being there.

Every week and basically just program-wise our goal is to try to improve and come out victorious in the football game. So certainly didn’t do that.

And now we have a week here to figure out some answers and see what we can do to improve. That’s what the next couple of weeks will be for.

Purdue played a great football game. Credit to them. Basically they outdid us in every category. And certainly David Bell was outstanding. We knew that coming in. A tremendous football player and a lot of respect for him.

He and Karlaftis impacted the game an awful lot. And we knew it was going to be a tough contest. Bottom line is we didn’t get it done. They moved the ball well. The last time out against Minnesota, looked very similar to that. Had a hard time getting off the field and we couldn’t keep pace offensively either. Credit to our opponent. They did a great job.

For our football team, it’s the first time we’ve had to deal with a loss in a while. We’ll get a lesson in that. The biggest thing right now is we choose to move forward. That’s what I shared with the team a few minutes ago.

We have some time to stew and sit on it. But there’s nothing we can do about it. But we have to move on, see about moving forward and taking on the second half of the five-game schedule. And that’s where we’ll go now.

COACH FERENTZ: I don’t know if I can articulate it. It seems like we’ve seen somebody really good week in, week out. And that’s the case. Have a lot of respect for their receiver corps, the whole corps. Wright is a dangerous player. Anthrop is a good player.

They throw it well. Pressure them, they get the ball off quickly. But he’s a very unique player and productive. I’m sure I’ve been around guys that got 200-plus yards receiving, but I can’t remember. You guys could probably cite it for me.

COACH FERENTZ: I told them we’ve done a lot of positive things since January. So take that first seven games for what it is. It would be great to be sitting here 7-0, but that’s not the reality and shouldn’t be. We got off late today.

So I think we’ve done a lot of good things. We do better when we play as a team and can create some energy, and we never got that going today. Outside of our return game, I think and the kicking game was good. Outside of that it’s really hard to single anything out that looked really good.

But we have some strengths on this football team. And we’re seven games into it. So we’re young. I think we’re older now and we paid for a little bit of that today.

But hopefully we’ll continue to grow and then just put our sights on the next five.

COACH FERENTZ: It is hard. That’s why the teams don’t go undefeated too often. That’s everybody. Alabama went down. I’m not comparing us to Alabama by any stretch. But that’s a tough thing, especially about conference football play. I think that factors in as well.

But one thing about losing, and, boy, sitting here I was actually thinking at the end of the game about going over to Illinois, I don’t know what year, ’82 or ’83, it was 33-0 with a good football team. Those things happen.

They never taste good or feel good but you have to get back on your feet, go back to work.

COACH FERENTZ: I’m not sure I see that totally. I haven’t seen the film from today, but we had some pretty clean runs on them. Six, eight, 10-yard plays. I feel like we had some really good clean runs last two weeks and showed improvement.

I’ll see the tape from this game. If you look at the bottom line, sneaks, short yard situations, those kinds of things. But I think we’re growing there. But we obviously weren’t cohesive enough offensively couldn’t keep pace especially the second half. When you watch a clock wind down a little bit puts pressure on the fourth quarter, you can throw it out statistically, at least but I think we’re making some strides in the running game, which I’m encouraged about, we’ll see.

COACH FERENTZ: I think he’s done a good job for two seasons, really. I think he’s done a lot of good things. Today was a tough day for all of us and our protection wasn’t great. Made it tougher on him. Whatever interception number we ended up with, you can’t just discount — I’m not suggesting that. But especially the last couple. It’s situational, part of that is situational. Still show up in the stat column at the end of the year; I get it. We need to protect him a little bit better, keep working here.

COACH FERENTZ: He came back in. They checked him. Whatever, I think he fell, that’s what it looked like to me. Expect him to be okay. We’ll see how it is tomorrow, how sore he is.

COACH FERENTZ: And Cody (Ince), we thought would be able to make it. Couldn’t answer the bell. As the week went on there, leveled off. Lachey, somebody fell on him Monday or Tuesday, Wednesday, whatever it was. But I thought he might have a chance. Hopefully we’ll get him back after the break here. And Deontae Craig, somebody fell on him. I know that was Wednesday. We lost a couple of guys this week during the week.

COACH FERENTZ: It’s that way for the whole football team. It’s a tough locker room in there. It should be. Everyone is invested in the game. Goes back to January, not that everybody was here then. But that’s with how it’s supposed to feel when you go down. Not fun. No way to make it go away. I’m more experienced than anybody in the locker room and I haven’t found a way to make it feel better. Other than time. Usually time and going back to work helps you. One thing with the bye, we just can’t flip our sights to the next opponent Monday morning. We’ll have to deal with that.

There’s a lot of good things in front of us. We have a five-game schedule. We’ll regroup. We need rest right now, certainly with those injuries, get some guys recharged and come out a week from now hopefully ready to go.

COACH FERENTZ: What was it like, like nine seconds, not even, three. What are you going to do? Get somebody hurt. We did go for it the play before that, right? Tried to get the ball down the field.

That was not the game turner that’s for sure. I don’t think he could throw it that far. That would be tough.

COACH FERENTZ: I’d say it’s a team loss, Mike. I didn’t see much out there other than our return game that looked real good. Just like when we’re winning, one thing feeds off the other. Things complement each other. We couldn’t get off the field today.

Credit to Purdue, they had a good attack. That one receiver. Like I said, he had as good as a day I could remember us facing. I’m not sure I remember anybody rotating quarterbacks quite like they did. No. 12, also mixed in, but rotating both guys; they played really well, both of them.

COACH FERENTZ: We couldn’t get pressure on the quarterback. Start there. Then when we did bring pressure, he did a pretty good job for the most part getting the ball out, finding somebody who is open enough to convert the first downs. No matter what direction we leaned, they seemed to have an answer. And that’s good football on their part.

Anytime you don’t have success, everybody’s got an opinion about it. So if you’re not careful you start second-guessing yourself and doubting this or that and whatever. The whole trick is to get your eyes back on what you’re trying to do and work to improve. Not worry about what went wrong. There was plenty of that, in large part to our opponent’s credit.

But as I said, we’ve done a lot of good things in six weeks prior to this game and what we need to do is make sure we get back playing the way we want to play and how we need to play. And there’s no easy games up front. That’s something to make sure our players understand. I think they do.

Conference football is tough. If it turns out not to be, that’s a nice surprise. But that’s just the way it is.

COACH FERENTZ: As I said Tuesday, that’s Coach Brohm’s expertise and background. He’s done a nice job offensively everywhere he’s been. And I just said we couldn’t get off the field today, basically.

They drove it and then they got the points they needed to get. It’s not the first time they have done that, but we just didn’t have answers. A credit to them. They blocked well and threw and catch and ran it efficiently enough to be successful.