This news story was published on March 28, 2021.
Advertise on NIT • Subscribe to NIT

MACOMB, Ill. – Isaiah Weston took the opening offensive play of the game 75 yards for a touchdown, and Omar Brown capped the first half with a blocked field goal which he returned for a touchdown to lead UNI to a 34-20 road win over Western Illinois Saturday.

The Panthers took a touchback on the opening kickoff and took the ball at the 25-yard line. On first down, Justin Fomby found Weston for a completion. He beat three defenders and turned a short gain into a 75-yard touchdown.

The Leathernecks tied the game at 7-7 with a touchdown early in the second quarter. The Panthers regained the lead with a field goal with just 36 seconds remaining in the half.

Western Illinois drove to the ball down to the UNI 30-yard line and attempted a game-tying field goal as time expired in the second, but Brown came off the edge, blocked the attempt, gathered the ball and returned the ball 62 yards to give UNI a 17-7 lead at the half.

After forcing WIU to a three-and-out to start the third, the Panthers drove the ball 87 yards, capped by a Tyler Hoosman 6-yard touchdown to put the Panthers up 24-7 with 7:02 left to play in the third quarter.

The two teams traded field goals before Hoosman ran 29 yards untouched for another touchdown with 6:35 to play to put UNI up 34-13 and effectively put the game out of reach.

The Leathernecks added a touchdown late in the game to set the final 14-point margin.

UNI tallied 356 yards of offense on 61 plays, including 218 yards through the air and 138 on the ground. Fomby was 15-23 for 218 yards passing and a touchdown without an interception. Six receivers caught passes, including four each to Quan Hampton and Logan Wolf.

Hoosman was one of six rushers on the day, carrying the ball 14 times for 82 yards and the two TDs. Dome Williams racked up 71 yards on 12 carries, they both averaged 5.9 yards per carry on the day.

The Panther defense gave up the most yards of the season but surrendered just one touchdown before the game was out of hand. Riley Van Wyhe picked off a pass and returned it 34 yards late in the third quarter. Van Wyhe led UNI with 11 total tackles.

The Panthers are now 3-3 on the season with two games remaining. Western Illinois falls to 0-5 on the year.

UP NEXT
The Panthers are on the road for the final road game of the year. Friday, April 2 at the Dakota Dome in Vermillion, S.D., to face South Dakota. The Coyotes’ scheduled game against North Dakota State was canceled today.

NOTES:
– Matthew Cook hit a pair of field goals to move to a tie with Mike Molstead (1983-84)
– Tyler Hoosman matched his career-high two touchdowns, matching his performance against South Dakota in 2019.
– Quarterback Justin Fomby threw the first and longest touchdown of his two-game career on the first play of the game, a 75-yard TD to Isaiah Weston.
– Fomby recorded 218 yards passing, besting last week’s game for his career high by 13 yards.
– The touchdown is the 16th of Weston’s career.
– It was the longest score of his career, topping a 70-yard TD from the Missouri State game on Oct. 26, 2019.
– The blocked field was the first since Elerson Smith blocked a kick against South Dakota State in the playoffs in 2019. 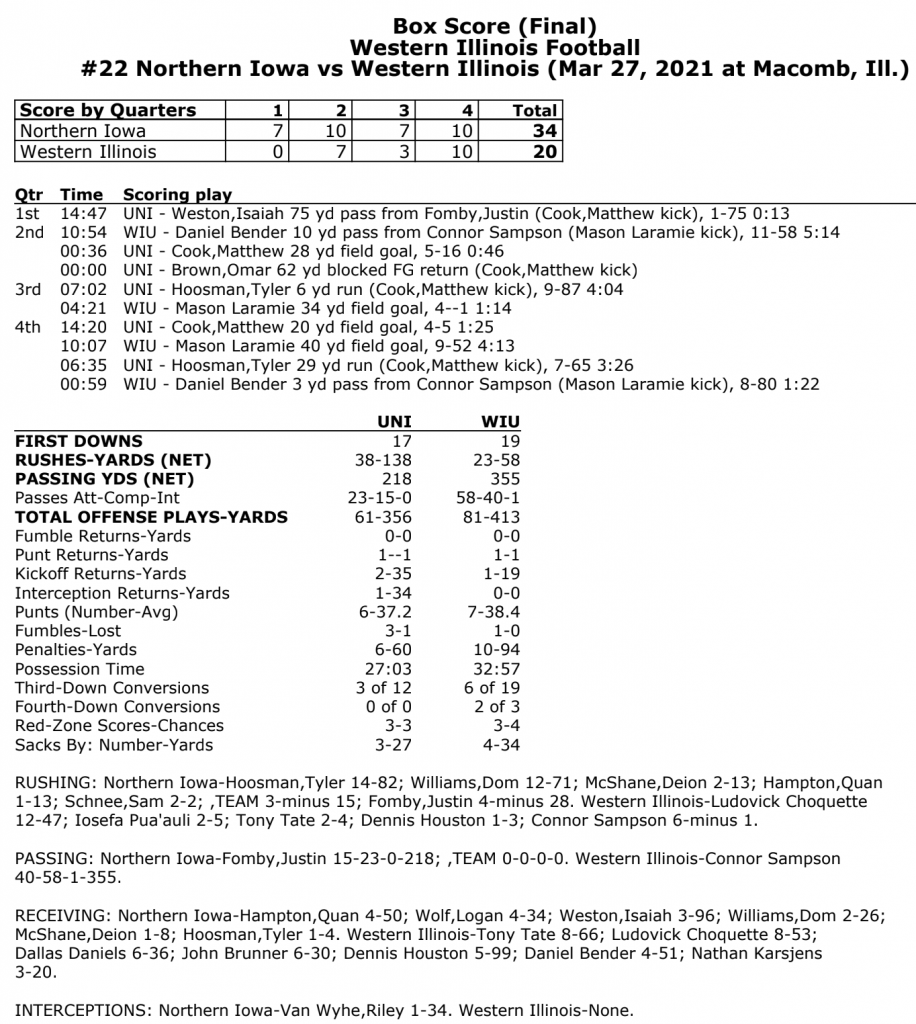