CEDAR RAPIDS – A drug user and marijuana seller who shot a gun at fellow drug traffickers was sentenced November 4, 2020, to three years in federal prison.

Jacob Tyler Ray Foss, age 21, from Evansdale, Iowa, received the prison term after pleading guilty to being a drug user in possession of a firearm.

In his plea agreement, Foss admitted he was at his apartment when two men attempted to kick in the door. Foss fired shots to scare the men off. After the men left his door, Foss continued to fire at their car. Foss also admitted that he possessed the firearm in connection with other offenses, including possession with intent to deliver marijuana. Foss was also aware the firearm was stolen.

Foss was sentenced in Cedar Rapids by United States District Court Judge C.J. Williams. Foss was sentenced to 36 months’ imprisonment and fined $1,000. He must also serve a three-year term of supervised release after the prison term. There is no parole in the federal system. Foss is being held in the United States Marshal’s custody until he can be transported to a federal prison.

The case was prosecuted by Assistant United States Attorney Emily K. Nydle and was investigated by a Federal Task Force composed of the Waterloo Police Department, the Federal Bureau of Investigation, and the Bureau of Alcohol, Tobacco, and Firearms assisted by the Black Hawk County Sheriff’s Office and Cedar Falls Police Department. 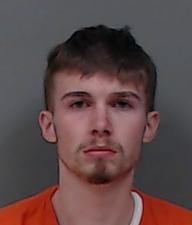