Wanted woman taken off the streets

MASON CITY – A wanted woman was taken off Mason City streets by police on April 25th.

A Mason City police officer stopped a vehicle at about 1:00 AM near 5th SE and Massachusetts Ave. driven by Tanya Jean Veal, 31, who shows a Minnesota address, for equipment violations. Veal was arrested for having outstanding warrants and held for bond in the Cerro Gordo County Jail.

Veal, who has a very serious criminal record, was most recently stopped by the Iowa State Patrol on February 8th and later charged on March 18th with 3rd offense possession of methamphetamines; possession of marijuana; and driving while revoked. She is being held in the Cerro Gordo County Jail on bond of $7,000, $2,000 and $1,000, respectively.

Veal is awaiting a hearing on May 8th, 2013 on possession of meth, 2nd offense, a serious misdemeanor. There was a warrant issued for her arrest in that case after failing to show for court on April 24th. She has plead not guilty and faces another hearing on May 8th.

Veal is also awaiting trial on June 4th, 2013 on a charge of enhanced theft in the third degree brought by Mason City police.

Veal plead guilty in 2002 to assault with intent to inflict serious injury.  She still owes Iowa courts $649.10 from a 2005 charge of fourth degree theft to which she plead guilty. 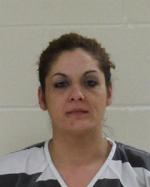 One Response to Wanted woman taken off the streets