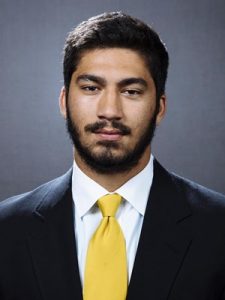 IOWA CITY – University of Iowa defensive end A.J. Epenesa has been recognized as Big Ten Conference Defensive Player of the Week following Iowa’s 23-19 win over seventh-ranked Minnesota. The announcement was made Monday by the Big Ten office.

Epenesa (6-foot-6, 280-pounds) is a native of Glen Carbon, Illinois (Edwardsville High School). He earns the third conference honor of his career after sharing the defensive honor a year ago for his play in wins over Iowa State and Illinois.

Epenesa recorded three solo tackles and one assist as Iowa handed Minnesota its first loss of the season. He recorded 2.5 of Iowa’s six sacks, along with forcing a fumble and collecting one quarterback pressure. His final tackle of the game came on Minnesota’s final possession and resulted in the Golden Gophers facing a third-and-21 in the final two minutes. Riley Moss intercepted a Minnesota pass two players later to secure the Iowa victory.

Epenesa has 26 tackles in 10 games (16 solo, 10 assists). He leads the Hawkeyes with seven sacks and nine quarterback pressures, while ranking second in tackles for loss. He shares the team lead with two forced fumbles.

Epenesa led the Big Ten and ranked ninth in the nation last season with 10.5 sacks. He earned preseason All-America honors from six publications and was named to watch lists for the Nagurski, Bednarik, Lott, and Hendricks awards.