This news story was published on August 21, 2019.
Advertise on NIT • Subscribe to NIT

HUMBOLDT – A wanted man was caught after a police pursuit in Humboldt Tuesday afternoon.

On August 20, 2019, at approximately 3:19 PM, an officer with the Humboldt Police Department on routine auto patrol observed a 2013 Chevy Silverado pickup near the intersection of 6th Ave N and 6th Street N in Humboldt. This vehicle had been reported stolen from Webster County the previous day. The officer observed a male subject driving a motorcycle in front of the stolen pickup, and the two vehicles appeared to be traveling together. The officer believed the driver of the motorcycle appeared to be Bradley Baumann, 34, from Fort Dodge. The officer knew Baumann was a suspect in multiple stolen vehicles in the area. The officer stopped the stolen pickup, but the motorcycle fled the area. A deputy with the Humboldt County Sheriff’s Office responded to assist and located the motorcycle. The deputy attempted to stop the motorcycle, but Baumann refused to yield and led the deputy on a pursuit throughout Humboldt. Baumann eventually lost control of the motorcycle near 3rd Ave S and 3rd Street S in Humboldt, striking a house, then fled on foot. Baumann was located hiding in an apartment building nearby a short time later. Baumann was taken into custody without incident and transported the Humboldt County Memorial Hospital to be treated for minor injuries sustained in the accident. Baumann was treated and released, then transferred to the Webster County Jail. Baumann was arrested for an outstanding warrant from Webster County for parole violation, no bond.

The investigation into this pursuit is ongoing, and charges in Humboldt County are pending.

The investigation into the stolen pickup is also pending. 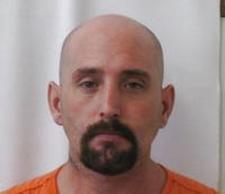 3 Responses to Wanted man caught after police pursuit in Humboldt