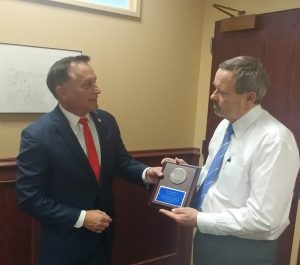 “Ken was the Cerro Gordo County Auditor for 25 years before spending the past year in my office,” Pate said in a statement. “His impact on Iowa’s elections is immeasurable. Ken retires on Friday & we wish him nothing but the best.”

Earlier this month, Pate announced Mr. Kline would be retiring. He also announced the hiring of Heidi Burhans as Iowa’s Administrator of Elections. Burhans will serve as a key liaison with all 99 county auditors and the Iowa Legislature. She is currently the Madison County Auditor.

Burhans will begin serving as State Administrator of Elections on February 1.
“It is an honor to be named Administrator of Elections by Secretary Pate,” Burhans said. “Preserving the integrity of the election process is more important than ever. I look forward to providing county auditors with the support necessary to keep the election process secure and accessible for the voters of Iowa.”

Heidi Burhans is currently in her second term as Madison County Auditor and Commissioner of Elections. She is a legislative liaison for the Iowa State Association of County Auditors. Burhans also serves on the State Election Administrators Training Curriculum Board and Iowa’s Mental Health Risk Pool Board. Burhans previously worked as the city clerk of Truro.

Kline joined the Iowa Secretary of State’s Office in January 2018 after serving 25 years as the Cerro Gordo County Auditor. He is a past president of the Iowa State Association of County Auditors, creator of the national award-winning Precinct Atlas electronic poll book program and worked for many years as a legislative liaison for county auditors.

“I am grateful to have been part of a hard-working team of professionals who are dedicated to the principles of good elections,” Kline said.

His last day on the job will be February 1.

“Ken has made a tremendous impact on elections across the state and in our office. He is a dedicated elections official who has served Iowa well for many years,” Secretary Pate said. “Ken is a true friend and we all wish him the best on a well-earned retirement.”