Grundy County Sheriff’s Deputies and Agents with the Iowa Division of Criminal Investigation arrested Armando Adame III of Waterloo, Iowa on January 29th, 2019. Adame was taken into custody at the Fort Dodge Correctional Facility in Fort Dodge, Iowa, where he was serving a sentence on prior unrelated convictions. Adame has been charged with Murder in the First Degree and Possession of a Firearm/Offensive Weapon as a Felon.

On October 26th, 2017, Michael Bruce Johns, age 28 was reported as a missing person to the Grundy Center Police Department. The Grundy County Sheriff’ Office and the Iowa Division of Criminal Investigation were subsequently contacted for assistance. The subsequent investigation developed information that indicated that that foul play was suspected in Johns’ disappearance.

On December 1st, 2017, the Floyd County Sheriff’s Office was notified of a body that was discovered near 290th Street and Shadow Avenue in rural Floyd County, about 10 miles south of Charles City. This was the area where law enforcement had previously requested the public’s assistance in locating Johns. The body found at the scene was subsequently transported to the Iowa Office of the State Medical Examiner (IOSME) in Ankeny, Iowa for autopsy and was positively identified as being the body of Michael Johns. The autopsy determined the cause of Johns’ death was from a shotgun wound to the head. The manner of death was ruled a homicide.

During a subsequent interview with an individual who was with Johns and Adame on October 24th & 25th, 2017, it was learned that while driving from Charles City during the early morning of October 25th, 2017, Adame and Johns got into an argument inside a vehicle. The other individual stated that while they were stopped on a gravel road, Adame pulled Johns out of the vehicle and then shot and killed Johns with a sawed off shotgun. During a subsequent plea agreement with Federal Prosecutors, accepted on May 101h, 2018, Adarne admitted to possessing the aforementioned shotgun on October 25th, 2017.

On December 7th, 2017, Adame was taken into custody at the Black Hawk County Jail pursuant to a federal arrest warrant, charging him with being a felon in possession of a firearm, after the Iowa Division of Criminal Investigation Criminalistics Laboratory located a latent print on the firearm that was consistent with Adame’s palm print.

On May 10th, 2018, Adame pled guilty in U.S. District Court, Northern District, to possession of a firearm and ammunition by a felon and possession of an unregistered destructive device.

On October 24th, 2018, Adame was sentenced to serve 25 years in Federal Prison after pleading guilty to three Federal firearms charges. 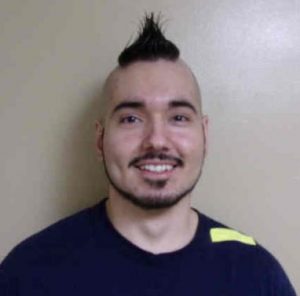