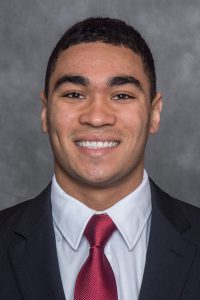 IRVING, Texas – Iowa State junior safety Braxton Lewis was named Big 12 Defensive Player of the Week after his performance in Iowa State’s 48-42 win over No. 25 Oklahoma State on Saturday.

A native of Overland Park, Kan., Lewis was a key player in Iowa State’s effort on defense, leading the team in tackles with seven and picking off a key fourth-quarter pass.

Lewis also had on tackle for loss to help the Cyclones establish a new school record for stops behind the line of scrimmage with 16.

Lewis leads the Big 12 and ranks fourth nationally in interceptions per game at 0.6. He has picked off a pass in three-straight games, tying for the fifth-best streak in school history.