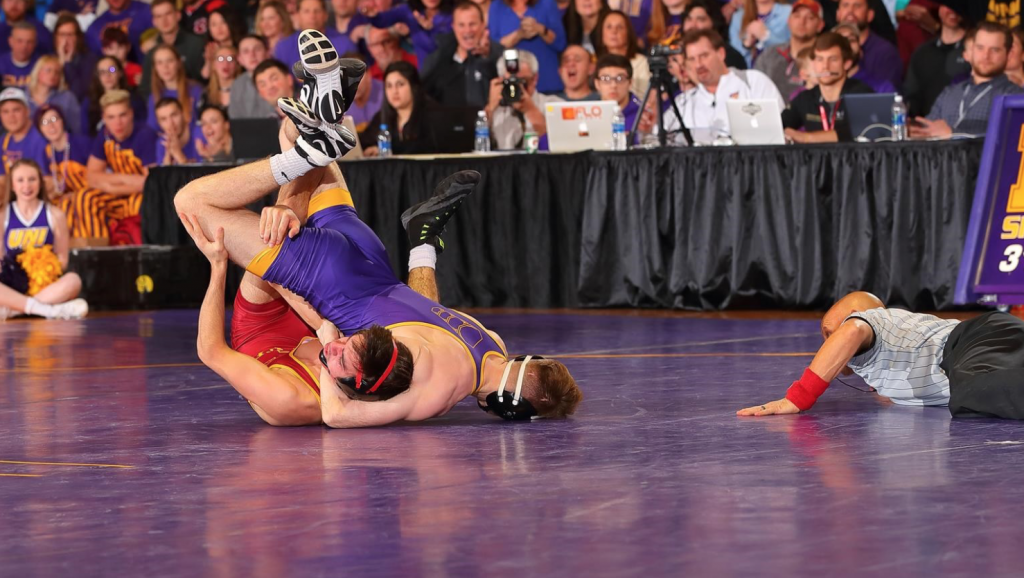 UNI wrestling won eight matches in the teams’ first official Big 12 matchup against each other. It also marks the first time UNI has beaten Iowa State in consecutive wins since the 2003 and 2004. UNI improves to 6-4 overall, 3-2 in the Big 12. ISU falls to 8-9 overall, 3-6 in the Big 12. The win was UNI’s largest margin of victory of Iowa State in program’s history.

“We kept attacking for the most part, which is what I want to see,” said UNI head coach Doug Schwab. “A packed West Gym is fun. I want it like this every time. We just need to compete in a way that people don’t want to miss it. It was a great atmosphere.”

In the front half of the dual, Iowa State picked up a win at 133 pounds from redshirt sophomore Markus Simmons. The Broken Arrow, Okla., native poured it on in a 14-0 major decision over Jack Wagner.

In the first period, Wagner was in on a single leg, but Simmons bounced out of it and blasted the Panther for two. He then turned Wagner for four points on a near fall to jump out to a 6-0 lead. He would score on another takedown and four-point near fall in the third to pad his lead. He racked up 2:21 of riding time in the victory.

At the intermission, the Cyclones trailed the Panthers, 18-4.
Redshirt junior Skyler St. John was victorious at 165 pounds. The Cedar Rapids, Iowa, native built a 5-3 lead on a reversal, takedown and an escape. With under a minute left, he secured one last takedown to solidify the victory over UNI’s Dan Kelly.

Jay Schwarm led off the dual at 125 pounds with his 13th fall of the season to put UNI up 6-0. He grabbed a takedown right away and stuck ISU’s Sinjin Briggs in 51 seconds, making it his 10th first-period fall of the season.

The Panthers gave up a major decision at 133 pounds, but got a forfeit at 141 pounds.

No. 8 Max Thomsen kept the momentum rolling at 149 pounds. His three takedowns propelled him to a 7-5 decision over No. 20 Jarrett Degen. It was Thomsen’s third top-20 win of the year. He also had an exhibition win against No. 5 Matthew Kolodzik of Princeton to kick off the season.

A last-second takedown by UNI’s Logan Ryan at 157 pounds prevented sudden victory. Ryan beat Chase Straw by 3-1 decision to give the Panthers an 18-4 lead at intermission.

ISU came out of the break to take 165 pounds, but it was UNI for the rest of the dual.

“I still think there are situations we can attack even more and score more points,” said Schwab. “Lujan – I like how he competed today – a little gritty and edge to him.”

No.7 Taylor Lujan grabbed seven takedowns to earn a 17-6 major decision over ISU’s Danny Bush at 174 pounds. No. 10 Drew Foster beat Pestano with a 6-4 decision.

Carter Isley grabbed one takedown against returning NCAA qualifier Marcus Harrington and went on to win, 4-3.

I like where our team is at,” said Schwab. “We’re healthy. That’s a testament to our guys and the work they’ve done, not just this season, but all spring, all summer all fall, the year before. And they’ve kept themselves strong. We have a good strength program, and we should be best at the end of the year, which is what you want.”

UNI will host No. 3 Missouri 2 p.m. Saturday at the West Gym for Senior Night. The Panthers will honor their only senior, Jake Hodges.

Next Sunday marks the regular season finale for Iowa State. They’ll play host to No. 3 Iowa in this year’s Iowa Corn Cy-Hawk Dual. The Cyclones and Hawkeyes will wrestle at 2 p.m. The dual will be broadcast on Cyclones.TV.