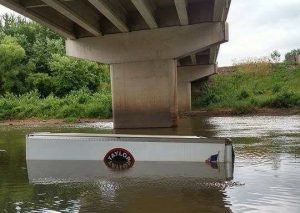 INDEPENDENCE, IOWA – An Illinois man lost his life after his truck vaulted off an Iowa bridge and landed in a river.

On Friday, July 21, 2017 at approximately 11:35 AM, the Buchanan County Sheriff’s Office received a report of a box truck in the Wapsipinicon River under Highway 20 east of Independence, Iowa. Sheriff’s Deputies and emergency services were dispatched to the scene. It was determined that the vehicle was travelling westbound on Highway 20 at the Wapsipinicon River Bridge. For unknown reasons, the vehicle left the roadway, entered the median and collided with a guardrail before vaulting off the bridge embankment and into the Wapsipinicon river. After the accident, westbound Highway 20 was closed for a period of time while crews worked to remove the truck from the river.

Later, it was learned that the driver was found in the river and was identified as 58-year-old Michael Wallace of Hazelcrest, Illinois.