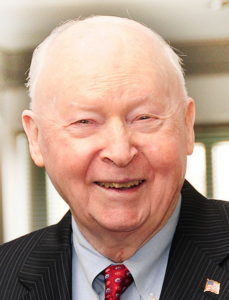 IOWA CITY – As a farm boy near Belle Plaine, Iowa, Henry Tippie (1949 B.S.C.) was fascinated by sports. That love of athletics has always included the Iowa Hawkeyes.

For 60 years, Henry and his wife, Patricia, have shown their love for the University of Iowa and its student-athletes by cheering on the Hawkeyes in the stands, creating a number of endowed scholarships, and supporting Iowa football, including naming the Tippie All-American Room in the Stew and LeNore Hansen Football Performance Center.

The Tippies are continuing their support by creating the first endowed position in the UI Department of Intercollegiate Athletics. The Tippies made a $5 million commitment to endow the UI’s athletic director’s position, and in honor of their gift, the position will be named the Henry B. and Patricia B. Tippie Director of Athletics Chair.

“Hawkeye athletics is important to not only Patricia and me, but also to so many people around the state of Iowa and beyond,” says Henry Tippie, who was named National I-Club Hawk of the Year in 2013. “We love Iowa, and because we value the consistent and steadfast leadership of Hawkeye athletics, we’re delighted to endow this position.”

Throughout its history, the UI Department of Intercollegiate Athletics has had a strong history of leadership, and a common thread has been a commitment to excellence and a dedication to the values of the UI and the people it serves. The Tippies’ gift to Hawkeye athletics will substantially expand the athletic director’s ability to invest in programs and innovations that boost Iowa’s competitive advantage and enhance the student-athlete experience.

The Tippies’ gift will be invested in the Henry Fund, a fund managed by M.B.A. students in the UI Henry B. Tippie College of Business. Annual payout from the gift will be available to the athletic director to spend on top department priorities. With this gift, Iowa will be the third Big Ten Conference school to endow its athletic director’s position, and the Henry Fund will be the fourth largest student-managed fund in the Big Ten Conference.

Gary Barta, who will hold the position of Henry B. and Patricia B. Tippie Director of Athletics Chair, says private support from individuals like the Tippies is important because Hawkeye athletics is 100 percent self-supporting and receives no state funding.

“I’m grateful to the Tippies for understanding the value of athletics and how much our sports teams contribute to the state and the Hawkeye community,” says Barta. “This generous gift will elevate our programs and will continue to help transform our Hawkeyes into tomorrow’s leaders.”

Throughout the years, the Tippies have supported numerous UI programs and initiatives, and their giving has transformed the university. In recognition of the Tippies’ visionary giving, the UI renamed its business college the Henry B. Tippie College of Business. The Tippies also were some of the most generous contributors to the recently completed For Iowa. Forever More. campaign.