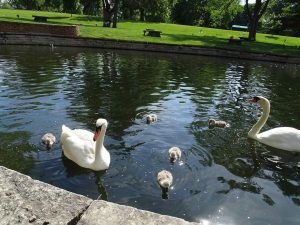 Facebook photo posted to “Friends of Jack and Jill”

WEST DES MOINES, IOWA – Police in this upper-scale Des Moines suburb investigated the care of a well-known pair of swans known as Jack and Jill, who live in a cemetery.

The West Des Moines Police Department and WestPet Animal Control responded to concerns about the health and wellbeing of the two swans, Jack and Jill, who reside at Resthaven Cemetery. In the past week, the department met with both the complainants (people who visit the swans regularly) and Resthaven management regarding the animals.

Due to complaints and concerns from the concerned citizens, the owners of Resthaven Cemetery, Dignity Memorial out of Houston, Texas, agreed to have the swans examined, and they are currently at Iowa State University. Veterinarians have assessed blood work from both of the birds and have commented that neither of the swans are suffering from malnutrition and the food used by the Resthaven staff to feed the swans is acceptable. There had been complaints leveled against the cemetery owners for improperly feeding the swans.

Jack and Jill are being treated for a condition known as Bumble Foot, which is common in water fowl according to the veterinarians. This condition, however, requires surgery which is scheduled for early next week. The last report the police department received is that both swans are in stable condition at this time. Both are currently on medication to assist in the up-coming surgery and are wearing special footwear to protect their feet until after surgery. While at Iowa State University, Jack and Jill have been housed together in a separate padded stall with a pool to swim in and seem very content.

The Department of Natural Resources has tested the water in the pond at the cemetery and the department is awaiting those results. Concerned citizens had leveled complaints about the “dirty water” in the pond. The housing area at Resthaven that has been constructed for Jack and Jill during the winter months has been examined by WestPet Animal Control and it meets their expectations.

Resthaven management has been cooperative and has agreed to do whatever needs to be done to ensure the safety of Jack and Jill. The West Des Moines Police Department, along with WestPet Animal Control, both say they are satisfied with Resthaven’s response to this matter and will continue to monitor the situation.