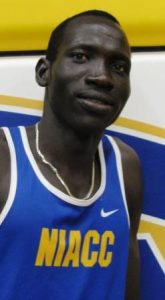 Khat helped lead NIACC to an eighth-place finish in the college division with 259 points..