This news story was published on June 15, 2016.
Advertise on NIT • Subscribe to NIT 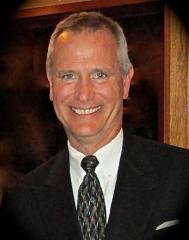 HAMPTON, IOWA – The mayor of Hampton had stern words – and perhaps an ominous warning – for anyone coming to his town who disagrees with him.

Hampton Mayor Brook Boehmler last week became the latest high profile person to negatively label the people of North Iowa who disagree that a massive pig slaughterhouse is great for the area.  That development project was turned down in Mason City on May 3 after citizens protested, and Prestage Foods has been searching for a new home in Iowa ever since.

On June 9, Boehmler was present as his city council unanimously passed a resolution in support of welcoming Prestage Foods to Franklin county and authorizing the county board of supervisors to work to bring the North Carolina pork processor to the area. At that meeting were some Mason City and other out-of-town folks who disagreed with the resolution and came to Hampton to voice their opinions against the Prestage plant. 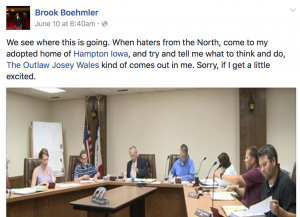 After the meeting, on June 10, Boehmler shared via social media a KIMT story titled “Hampton city council supports Prestage Farms.”  As he shared the story – which shows a photo of himself and the council – Boehmler wrote (sic) “We see where this is going. When haters from the North, come to my adopted home of Hampton Iowa, and try and tell me what to think and do, The Outlaw Josey Wales kind of comes out in me.”

In calling persons who disagree with him about the Prestage pork plant “haters”, Boehmler joins Ron Prestage of Prestage Foods and Mason City councilwoman Janet Solberg and others in the name-calling and negativity. Ron Prestage called North Iowans who opposed the plant “kooks and racists” while Solberg chimed in with support for those remarks, saying racism killed the plant in Mason City.  Mason City councilman Travis Hickey said he would not do business in Mason City if he owned a business, as a result of the “no” vote on Prestage. 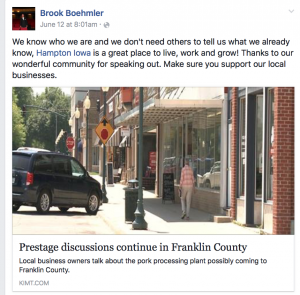 After his remark about “haters from the north”, Boehmler made another comment. On June 12, he wrote “We know who we are and we don’t need others to tell us what we already know” as he shared yet another KIMT story about Prestage, this one titled “Prestage discussions continue in Franklin county.”

Brook Boehmler is more than just the mayor of Hampton; he is a highly-educated man (MBA, University of New Mexico) with a deep resume, which includes past stints at the Greater Franklin County Chamber of Commerce (Executive Director), Thomson Elite, and ProLaw Software, according to his LinkedIn profile. Currently, he works in Mason City – where his June 10 and June 12 comments seem to be directed.  He is the NIACC Pappajohn Center Small Business Development Center Director. 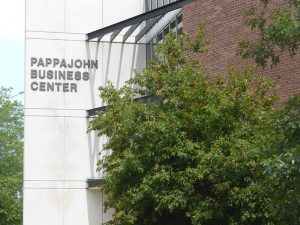 In response to Brook Boehmler’s comments and requests from readers to seek clarification, NIT Publisher Matt Marquardt made attempts to speak with him via phone.

Eventually reaching Boehmler at his desk in the Pappajohn Center in Mason City, Marquardt asked Boehmler about his remarks.

“I wanted to ask you about the comments you made,” Marquardt said to Boehmler.  “First, you called people who disagree with you ‘haters’. Can you explain that?”

“You reference the movie ‘The Outlaw Josey Wales’. The main character played by Clint Eastwood killed 54 people in that movie. Is this what you had in mind for the ‘haters’?” Marquardt asked.

In response, Boehmler laughed. He then said “No, no, no,” still laughing heartily. “That’s a Missouri thing. They were a free state.”

Boehmler then denied that his comments had anything to do with Prestage Foods.  He said “You need to call me later.  I am at work” and offered his cell phone number and a chance for second conversation.

As a person charged with the economic well-being of the Hampton area, Greater Franklin County / Hampton Chamber of Commerce President Donnis Borcherding was left a message seeking comment.  She returned the call at 4 PM.  During the ensuing discussion with NIT Publisher Matt Marquardt, she claimed to have no knowledge of Boehmler’s remarks.  When the remarks were read back to her and asked if she values visits to town from Mason City folks, she refused comment, but was invited to look at Boehmler’s Facebook page for herself and phone back again with a comment.

Also, NIACC Pappajohn Director Tim Putnam was phoned at 2:50 PM and a message was left, seeking comment on Boehmler’s remarks. That message was returned after 4 PM.  Mr. Putnam said he was unaware of Boehmler’s comments but said he understood why NIT was asking him questions.  He declined to comment after the comments were read back to him, but did claim that Boehmler’s remarks were “made as the mayor of Hampton” not as a NIACC employee.  Marquardt said the remarks were on Boehmler’s personal Facebook page, not a press release from the city of Hampton.

“It’s been an interesting story, but all I’m saying….is give peace a chance.”

Boehmler returned a call to NIT at about 5:20 PM.

Mr. Boehmler stressed that his comment on June 10 about The Outlaw Josey Wales was not meant to be taken literally, and referenced the recent Orlando shooting tragedy and how in “today’s climate” he could see where a comment like that would be inappropriate.

He also stressed that Hampton is a “welcoming community” that respects the views of others. 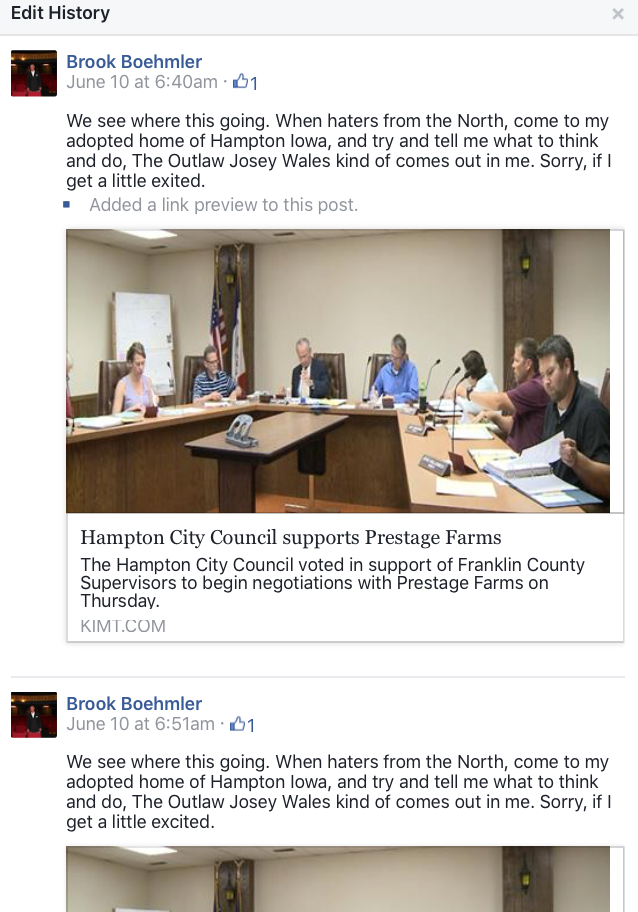 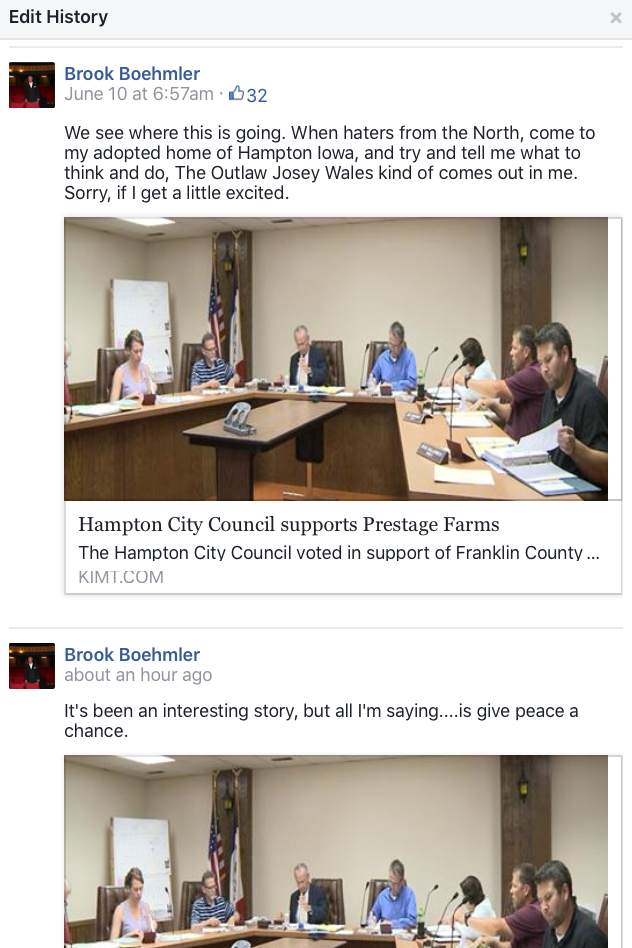 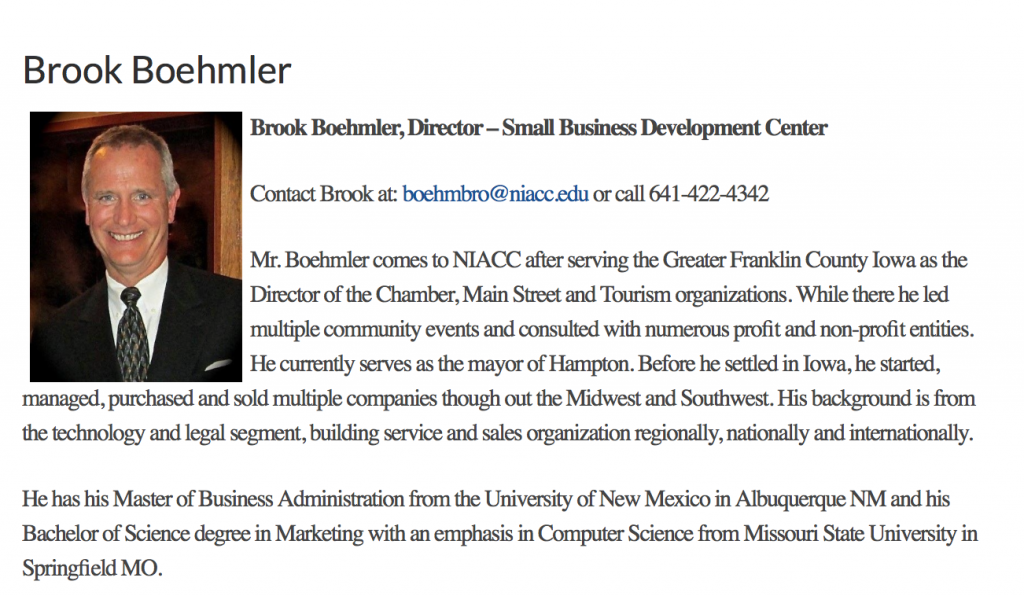 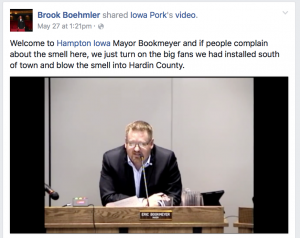 Perhaps a comment in jest… but how would the folks south of Hampton react?