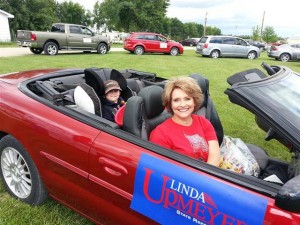 Another productive week in the Iowa House is under our belts. We continue to work hard on behalf of Iowans as we move various pieces of policy forward that will make Iowa a better place to live and work.

Since session began, I have written nearly every week about how important coupling with the federal tax code is to the taxpayers of Iowa. This week the House and Senate both passed House File 2433, which includes coupling and a provision related to sales tax on manufacturers. This bill provides immediate and direct tax relief to more than 177,000 Iowans by coupling, as well as permanent tax relief and clarity to Iowa manufacturers.

This bill exemplifies that even with divided government, House Republicans are able to advance policies that give taxpayers a seat at the table.

This week, the Revenue Estimating Conference (REC) met to make their latest projections on the amount of tax revenue coming into the state. The REC is made up of three members, one from the nonpartisan Legislative Services Agency, one from the State Department of Management, and another from the private sector. During their meeting this week they made revenue projections for the current fiscal year (FY16), the upcoming fiscal year (FY17), and the following fiscal year after that (FY18).

At the beginning of the meeting, the REC reviewed several economic indicators like the agricultural economy, the labor market, consumer spending, and many other factors. After reviewing all of this data, the panel remained cautious but said that the state’s economy is seeing slow, but steady growth. The need for caution is exactly what House Republicans have been stressing for the last six years. It’s difficult to predict bumps and spurts in the economy, so to be able to withstand something like that requires a conservative approach to state spending.

The REC made no revisions to the outlook for FY16, the current budget year that runs until June 30, projecting that the state still stands to collect $7.045 billion.

For FY17 revenue is expected to increase slightly, by about $30 million due to the federal tax extenders bill passed by Congress late last year, to $7.357 billion. This is the budget that the General Assembly is currently putting together which will begin on July 1.

According the LSA, the Legislature will be bound by the 99% expenditure limitation of $7.351 billion, which spending cannot exceed.

When putting together budget targets, House Republicans continued to abide by the common sense principle of not spending more than the state was bringing in. We built our spending plan using ongoing revenue and not one-time funding sources. For this reason, our plan is $31 million lower than the expenditure limit and we won’t be forced to make any reductions in our preliminary spending targets.

Senate Democrats on the other hand proposed unsustainable funding levels while also using one-time funding sources. The Senate’s budget plan is currently over the expenditure limitation by $58 million, so they will need to make some serious cuts in order for their budget to live within the available revenue. In the end, we must agree on a budget within our legal limitations.

The REC also gave us our first look at the revenue picture for FY18, which begins July 1, 2017. They projected total revenue of $7.659 billion, an increase of about $301 million compared to the FY17 estimate. This is the first time that the REC has issued a revenue forecast this far out, so we will have to wait and see how accurate that number is as we move forward.

With a clear revenue picture and an agreed to budget number, I am very optimistic that we will have resolution on education funding and other issues soon.

When I became Speaker, I made it clear that I wanted to have a session that ends on time. For the last few years, the Legislature has been unable to get its work done in a timely manner. We have made significant progress so far this year and I believe that we will be able to complete our work within the allowed 100 days, although that will require the same commitment from across the rotunda.