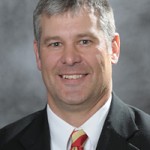 Today was the last game for Iowa State head football coach Paul Rhoads, who compiled a 32-55 record in seven years as the Cyclone mentor. He led ISU to three bowl games, including a victory in the 2009 Insight Bowl.

The Cyclones couldn’t get their offense on track, recording 284 yards, the lowest output of the season. Mike Warren ended the game with 74 yards on 19 carries to give him 1,339 on the season, the fifth-best season total in school history.

The Mountaineers got on the board first after an ISU opening drive was stopped by an interception. Skyler Howard hit Shelton Gibson on a 60-yard catch and run on the next play to put WVU up 7-0.

ISU closed the gap to 7-3 early in the second quarter on a 33-yard field goal from Cole Netten. ISU’s first points were set up by a key fourth-down stop by Levi Peters, who stuffed Wendell Smallwood for no gain on 4th-and-1 at the ISU 42-yard line.

WVU went into the break with a 13-6 lead. WVU’s Josh Lambert made a pair of field goals followed by a Netten 49-yard field goal to end of the half.

ISU came up empty on its first three drives of the second half, including one set up by Qujuan Floyd’s first career interception. Lambert increased the WVU lead to 16-6 with 7:36 left in the third quarter on a 34-yard field goal.

Howard then provided the Mountaineers the cushion it needed with a 32-yard touchdown run to make it 23-6 with 3:38 left in the third quarter. Rushel Shell then punched in the final score of the game on a nine-yard rush with 10:22 to play, giving the WVU a 30-6 victory.

Turnovers plagued the Cyclones again. Two first-half interceptions led to 10 points for the Mountaineers. ISU ended the game with three turnovers, its second-straight game with three or more miscues.