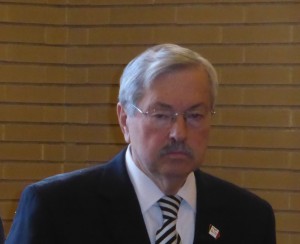 Auditor of State Mary Mosiman on Thursday released a report on a review of the Iowa Department of Administrative Services (DAS) for the period April 5, 2011 through February 7, 2014. The review was performed as a result of concerns brought to the attention of the Office of Ombudsman regarding leave taken by DAS’ former Chief Legal Counsel, Ryan Lamb.

Mosiman reported the review identified $22,635.55 of improper disbursements. The improper disbursements identified include $13,098.28 of excess gross pay and benefits Mr. Lamb received during the period he was on military leave and $9,537.27 of excess vacation payout at the time he left DAS employment. The excess gross pay and benefits received by Mr. Lamb were a result of DAS not complying with the State’s military leave policy.

Mosiman also reported Mr. Lamb did not meet the experience requirements for the Attorney 3 position he held from December 23, 2011 through March 1, 2012. In addition, because his personnel file did not contain his résumé, it could not be determined if he met the minimum education, experience, and special requirements for the other positions he held at DAS.

In addition, Mr. Lamb’s base pay increased approximately 23% between April 5, 2011, the date he began employment with DAS, and October 25, 2013. However, since the pay raise he received on October 25, 2013 was retroactive to December 12, 2012, the entire base pay increase was essentially granted over a period of less than 21 months through a position reclassification, pay increases awarded by former Director Mike Carroll, and cost of living increases. Unless identified in the report, all increases were awarded in accordance with State policies and Administrative Rules.

The report includes recommendations to strengthen DAS’ controls over timesheet approval, implementing procedures to ensure compliance with the State’s military leave policy, and ensuring employees meet the minimum qualifications for their position.

A copy of the report: