Statement by the President on the Keystone XL Pipeline 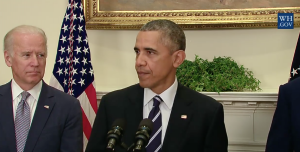 THE PRESIDENT: Good morning, everybody. Several years ago, the State Department began a review process for the proposed construction of a pipeline that would carry Canadian crude oil through our heartland to ports in the Gulf of Mexico and out into the world market.

This morning, Secretary Kerry informed me that, after extensive public outreach and consultation with other Cabinet agencies, the State Department has decided that the Keystone XL Pipeline would not serve the national interest of the United States. I agree with that decision.

This morning, I also had the opportunity to speak with Prime Minister Trudeau of Canada. And while he expressed his disappointment, given Canada’s position on this issue, we both agreed that our close friendship on a whole range of issues, including energy and climate change, should provide the basis for even closer coordination between our countries going forward. And in the coming weeks, senior members of my team will be engaging with theirs in order to help deepen that cooperation.

Now, for years, the Keystone Pipeline has occupied what I, frankly, consider an overinflated role in our political discourse. It became a symbol too often used as a campaign cudgel by both parties rather than a serious policy matter. And all of this obscured the fact that this pipeline would neither be a silver bullet for the economy, as was promised by some, nor the express lane to climate disaster proclaimed by others.

To illustrate this, let me briefly comment on some of the reasons why the State Department rejected this pipeline.

First: The pipeline would not make a meaningful long-term contribution to our economy. So if Congress is serious about wanting to create jobs, this was not the way to do it. If they want to do it, what we should be doing is passing a bipartisan infrastructure plan that, in the short term, could create more than 30 times as many jobs per year as the pipeline would, and in the long run would benefit our economy and our workers for decades to come.

Our businesses created 268,000 new jobs last month. They’ve created 13.5 million new jobs over the past 68 straight months — the longest streak on record. The unemployment rate fell to 5 percent. This Congress should pass a serious infrastructure plan, and keep those jobs coming. That would make a difference. The pipeline would not have made a serious impact on those numbers and on the American people’s prospects for the future.

Second: The pipeline would not lower gas prices for American consumers. In fact, gas prices have already been falling — steadily. The national average gas price is down about 77 cents over a year ago. It’s down a dollar over two years ago. It’s down $1.27 over three years ago. Today, in 41 states, drivers can find at least one gas station selling gas for less than two bucks a gallon. So while our politics have been consumed by a debate over whether or not this pipeline would create jobs and lower gas prices, we’ve gone ahead and created jobs and lowered gas prices.

Third: Shipping dirtier crude oil into our country would not increase America’s energy security. What has increased America’s energy security is our strategy over the past several years to reduce our reliance on dirty fossil fuels from unstable parts of the world. Three years ago, I set a goal to cut our oil imports in half by 2020. Between producing more oil here at home, and using less oil throughout our economy, we met that goal last year — five years early. In fact, for the first time in two decades, the United States of America now produces more oil than we buy from other countries.

Now, the truth is, the United States will continue to rely on oil and gas as we transition — as we must transition — to a clean energy economy. That transition will take some time. But it’s also going more quickly than many anticipated. Think about it. Since I took office, we’ve doubled the distance our cars will go on a gallon of gas by 2025; tripled the power we generate from the wind; multiplied the power we generate from the sun 20 times over. Our biggest and most successful businesses are going all-in on clean energy. And thanks in part to the investments we’ve made, there are already parts of America where clean power from the wind or the sun is finally cheaper than dirtier, conventional power.

The point is the old rules said we couldn’t promote economic growth and protect our environment at the same time. The old rules said we couldn’t transition to clean energy without squeezing businesses and consumers. But this is America, and we have come up with new ways and new technologies to break down the old rules, so that today, homegrown American energy is booming, energy prices are falling, and over the past decade, even as our economy has continued to grow, America has cut our total carbon pollution more than any other country on Earth.

America is now a global leader when it comes to taking serious action to fight climate change. And frankly, approving this project would have undercut that global leadership. And that’s the biggest risk we face — not acting.

Today, we’re continuing to lead by example. Because ultimately, if we’re going to prevent large parts of this Earth from becoming not only inhospitable but uninhabitable in our lifetimes, we’re going to have to keep some fossil fuels in the ground rather than burn them and release more dangerous pollution into the sky.

As long as I’m President of the United States, America is going to hold ourselves to the same high standards to which we hold the rest of the world. And three weeks from now, I look forward to joining my fellow world leaders in Paris, where we’ve got to come together around an ambitious framework to protect the one planet that we’ve got while we still can.

If we want to prevent the worst effects of climate change before it’s too late, the time to act is now. Not later. Not someday. Right here, right now. And I’m optimistic about what we can accomplish together. I’m optimistic because our own country proves, every day — one step at a time — that not only do we have the power to combat this threat, we can do it while creating new jobs, while growing our economy, while saving money, while helping consumers, and most of all, leaving our kids a cleaner, safer planet at the same time.

That’s what our own ingenuity and action can do. That’s what we can accomplish. And America is prepared to show the rest of the world the way forward.

Thank you very much.

"We’ve got to come together around an ambitious framework to protect the one planet we’ve got while we still can. If we want to prevent the worst effects of climate change before it’s too late, the time to act is now. Not later, not someday, but right here and now." —President Obama after announcing that the Keystone XL Pipeline is not in our national interest: http://go.wh.gov/Climate