MASON CITY – A Minnesota man who came to Clear Lake last spring to meet a woman at a hotel and then allegedly cut her with a knife and confined her against her will has been sentenced to decades in prison.

Al Mesenbrink, age 62 of Vadnais Heights, Minnesota, entered guilty pleas to charges of felony second degree kidnapping and willful injury and was sentenced Monday to 25 years in prison for the kidnapping charge and a consecutive 10 years for the willful injury charge. He will reside on the state’s sex offender list for life. He must also pay $4,027.91 in court costs and restitution.

The Clear lake Police Department began investigating an assault in conjunction with Minnesota authorities that occurred on April 20, 2014 involving a Clear Lake woman at a hotel. Messenbrink was charged in the aftermath of that incident, where the woman was allegedly assaulted and threatened with a knife. He was later arrested in Minnesota after he fled the scene before he was transported to jail in Mason City to face charges. 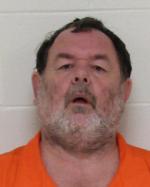