Brandi Munson, age 23, was arrested on October 15 by Mason City police after officers were called to a residence to investigate a domestic incident. She was charged with first offense domestic assault causing injury. A no-contact order was immediately imposed between Muson and her victim.

The next day, Munson allegedly violated the no-contact order, and was charged by police for that infraction.

On November 3, Munson plead guilty to both charges and was sent to jail for 7 days and was ordered to pay $281.50 in court costs. She was given a $50 per month payment plan. 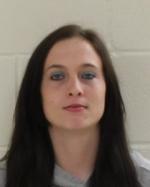 One Response to Mason City woman guilty of domestic assault