CERRO GORDO COUNTY – A Democratic insider has revealed to NIT that a fiery local blogger and “political guru” has gotten under the skin of the left-wingers and the party is now discussing what to do about his antics.

Todd Blodgett is son of Clear Lake political king-maker and former legislator Dr. Gary B. Blodgett – a former Iowa Legislator and retired Bush administration official – and is known by many as a Globe Gazette pot-stirrer whom they maliciously bring on board from time to time stoke the embers of debate and roil the masses on any number of hot-button topics.

Among Blodgett’s favorite targets when he writes and blogs on the Globe’s website or even submits a blog topic for publication are guns, drugs, and politics, and he has made no secret that he has little time for Democratic sentiments. He regularly engages in edgy and sometimes ferocious debate with nameless fellow-bloggers. In fact, just last year, Blodgett posted a series of incendiary comments on the blog-tabloid website GlobeGazette.com, where he made fun of liberals and even the God of Islam, Allah.  Blodgett said that liberals will “destroy America” and said “Alah SHMALA” among other provocative phrases.

Left-wingers seem to have had all they can stand of Dr. Blodgett’s son Todd.  One Democrat told NIT that “Blodgett packs a gun, and with some of the stuff he writes, we’re not sure if he’d use it or not; it’s so far out there.  We just want him to go away.”

Mostly, though, the Dem’s have taken very personally Blodgett’s Globe blogs, especially his laser-like rebuttals and snappy comebacks to anything a liberal might dare to type, and NIT has been clued in that they seek to do something about it.

Days ago, a Democratic party insider emailed to NorthIowaToday.com a lengthy, detailed description of a discussion Democrats had about Blodgett at last week’s Democratic Party Central Committee meeting.  Several big names were mentioned that joined in the discussion, which centered on Todd Blodgett and how they feel that the Globe Gazette is enabling his rants which punish lefties.

According to a Democratic insider who was present for what was described as a “heated exchange”, Mr. Chris Petersen of Clear Lake was recognized to speak by party chairman John Stone. Petersen, our source tells us, “was very upset, and angry. He didn’t mince any words.” Petersen expressed concerns about Todd Blodgett, who is no run-of-the-mill Republican whose right-wing views irk Democrats.  He served as a White House aide to President Ronald Reagan, and on the staff of President George H. W. Bush.  Mr. Blodgett also was a protege of the late Lee Atwater, who was the Chairman of the Republican National Committee.  According to the Associated Press and numerous other media sources, Blodgett also worked for the FBI as a full-time, professional informant, whom the bureau paid to infiltrate and surveil neo-Nazis, the KKK, the Aryan Nations, and leaders of the White Supremacy movement.

The source from the meeting, who willfully supplied NIT with a detailed description of the Dem’s discussion of Blodgett, claimed that Petersen said Democrats, “must do something about this Todd Blodgett.” The source said that Petersen then elaborated, claiming that Blodgett’s frequent blog columns in the Globe-Gazette, and the Globe Gazette, itself, are “a real problem for us.  We’ve got to start counter-acting Blodgett’s outrageous stuff.”

“Chris [Petersen] was about as adamant as I’ve ever seen him get, about anything.”

The source described reaction from several persons in attendance as “immediate,” and Joann Hardy, a party official, expressed agreement with Petersen. The source claimed that Mrs. Hardy said it was her understanding that Blodgett is paid by the Globe Gazette “to stir things up with readers.” Not so, chimed in yet another Central Committee member, Alan Steckman. Mr. Steckman is married to State Representative Sharon Steckman, who represents Mason City in the Iowa Legislature – the same seat that Todd Blodgett’s father, Dr. Gary B. Blodgett, held from 1992 to 2001. Steckman said he “doesn’t think Blodgett is paid,” but he was in complete agreement with Peterson and others present who believe that local Democrats need to “counteract” Blodgett’s opinion-style blog columns, and look into pursuing other media venues for getting the party’s message out to the public.

NIT did reach out to several Democratic party sources, who confirmed that Todd Blodgett was, indeed, discussed at-length during the left-wing pow-wow and strategy session. In fact, NIT received a number of email confirmations admitting to the discussion, although none would substantiate nor confirm exact quotes that the original source supplied.

That source described more of the discussion during the meeting:

“Chairman Stone, realizing that members of his organization were ramped up over the exchange, glanced towards Cerro Gordo county Supervisor Jay Urdahl, who is known to be a close friend of Mr. Blodgett. Urdahl is also heavily indebted politically to Gary Blodget, who has been his major financial backer since Urdahl first ran for the BOS, back in 1988.  In fact, Urdahl sometimes goes to Texas to stay at a Blodgett-owned bungalow and regularly leeches free lunches off of Todd, not to mention stiffs a lot of us on tabs and tips when we go out.”

“You should have seen it,” said another source, speaking on condition of anonymity. “John Stone and [state Senator] Amanda Ragan both kept glancing over at Jay, for at least half the time that they were bitching about his buddy, Blodgett. And this went on for quite awhile. I looked over at Jay a couple times, and you could just see he was worried sick that somebody would ask him about his recovering-addict right-wing friend who creates misery for us, with all that crap he writes.”

The source supplied more of the highly animated discussion:

“Another person at the meeting said that Todd Blodgett is a drug addict who was, basically, run out of Washington, D.C. At that point, Steckman jumped back in, and told the 30 or so people in attendance that he had recently sent a letter to the editor to the Globe-Gazette and he was disappointed in the Globe, because, he said, ‘my letter went nowhere, until I called the Globe, and complained that they keep running Todd Blodgett’s Op-Ed columns. And if they can publish Blodgett’s columns, then why can’t they run my letter to the editor?’ He said it was only after he called out the Globe-Gazette that his letter appeared in that newspaper.” 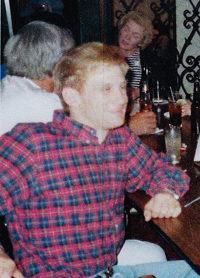 Upon receiving the detailed news tip from the Democratic insider, NIT reached out to Mr. Blodgett as well as other Democrats. He expressed bemusement that his political enemies “would even bother wasting time” on him.

“What was their purpose in all this?” Blodgett asked. “Why am I even on their radar? Don’t these Democrats realize that if they work hard, they just might be able to get Braley’s vote up to 48 percent?”

When informed that a Democrat at last week’s meeting alleged that Blodgett was “run out of Washington, D.C.” Blodgett laughed. “I left D.C. nearly seven years ago of my own accord. George W. Bush was still the President of the United States. At that time, my dad was serving in his administration, and my mom worked for Laura Bush in the White House,” Blodgett told NIT. “I’m not a felon, never been to prison, and no one ran me out. If anyone outside of the law had even tried to do that, it wouldn’t have gone well for them.”

Blodgett said he was “flabbergasted that anyone would even possibly believe this ridiculous allegation”, adding, “Now, you tell me, just who was supposed to have ‘run’ me ‘out’ of Washington? Do these Democrats think this was like Marshal Matt Dillon on ‘Gunsmoke’,” Blodgett added, referring to the long-running TV Western. “You know, where Marshal Dillon just tells people to get the Hell out of Dodge?”

Blodgett then said, “If this skirmish at the Central Committee meeting actually occurred, it proves that some Democrats are actually dumber, and waste even more time, than even I’d previously thought.”

NorthIowaToday.com shared with Blodgett the names of four of the participants who took part in the heated exchange which erupted at the mention of his name. He told us that he’d never met Mr. Petersen, but knows of him.

“He’s a heavily subsidized farmer, and idolizes Obama. I’m not pleased that my taxes support him, and, effectively, provide him with enough of a living to waste time at political meetings. He apparently knows that he can’t make it as a farmer without OPM,” Blodgett told NIT, referencing “other people’s money.”

Blodgett said he does know Joann Hardy, John Stone, and Alan Steckman. “Mrs. Hardy was my neighbor for many years, and her husband, Russ, was my shop teacher, at John Adams. I like and respect them both, despite our political differences.”

When asked about Steckman, Blodgett said, “I’ve only met Al a few times, and I like him. He’s smart, and very interesting to talk with.” As to Mr. Stone, Blodgett said that “John’s family and mine have been friends since LBJ was President. My brother and I went to elementary school and to MCHS with his brother. I like John, and he’s always been courteous and respectful to me. I just ran into him Friday, at the Courthouse. I was there to vote, and John and I walked in together. We had a nice chat.”

Editor’s note: NIT has been sent fresh information from the Republican camp as well, and will report on those developments as soon as possible.