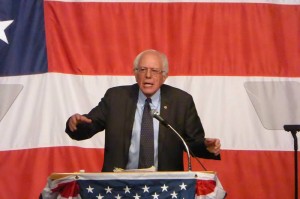 FLORENCE, SC – U.S. Sen. Bernie Sanders this weekend previewed his proposal to cancel all past due medical debt and address all future medical debt. In America today, medical debt is the leading cause of consumer bankruptcy with more than half a million Americans filing due to medical expenses each year.“In the United States of America, your financial life and future should not be destroyed because you or a member of your family gets sick,” said Sen. Bernie Sanders. “That is unacceptable. I am sick and tired of seeing over 500,000 Americans declare bankruptcy each year because they cannot pay off the outrageous cost of a medical emergency or a hospital stay. In the wealthiest country in the history of the world, 42 percent of Americans should not be losing their entire life savings two years after being diagnosed with cancer.”

Under a Sanders administration, families won’t be trapped with outrageous medical debt, or have their credit ruined by medical debt. The full plan will be announced within the next month.

The 2005 Bankruptcy reform bill written by Wall Street made it much more difficult to discharge medical debt by imposing strict means tests and eliminated fundamental consumer protections for the American people. It also trapped families with medical debt in long-term poverty, mandated that they pay for credit counseling before filing for bankruptcy, and increased the need for expensive legal services when filing a case for medical bankruptcy. That will fundamentally change under a Bernie Sanders administration.