This news story was published on October 15, 2014.
Advertise on NIT • Subscribe to NIT 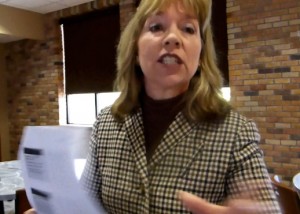 By now, some of you have heard that there was an incident at a “human rights symposium” held Tuesday, October 14, 2014 at the Mason City Chamber of Commerce, an event presented by state employees and with locally-appointed and elected public officials in attendance.  I have spoken to police and attempted to file assault charges against two individuals who, at this meeting, came into physical contact with me, attempted to prevent me from doing my job, and generally attempted to intimidate me and place fear within me. I found the actions of both individuals to be offensive and insulting, not to mention despicable and classless. Those two persons are Chamber of Commerce Director Robin Anderson and freelance reporter Tim Ackerman, who creates content for the Globe Gazette.

I did attend this meeting as a member of the media; I have been a media member for over 4 years.  I was called a “blogger” on TV Tuesday night; just another attempt to undermine and steal the voice NIT has built.  I wore clothing Tuesday that clearly displayed that I was working for NorthIowaToday.com local news. I did attend with the purpose of getting some answers. I asked some tough questions, and the two women from the Iowa Civil Rights Commission in Des Moines who were making the presentation answered them as I posed them, and continued right along with their presentation; they were generally good sports. Never was I asked to leave or stop asking questions by these two ladies. In fact, I only asked a few questions before Anderson and Ackerman crossed the room, separately, near the end of the one-hour presentation, and made physical contact with me. I have plenty of video to prove what happened at this incident. Video of Anderson’s assault against me was aired on KIMT TV as well, from a different angle.  It shows her reach for and grab my arm.  She did not like the questions I asked.  Ackerman approached a few seconds later. He bumped me, stepped on my foot and breathed on my face. I could smell his warm, disgusting garlic breath. I was extremely upset at that point, but generally held my composure. I tried to continue on working. 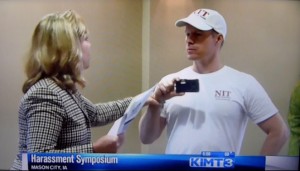 If a citizen, let alone a member of the media, cannot question government officials, do we still live in America or someplace else? These women drove to Mason City on the taxpayer’s dime. They work for the state of Iowa. Are they above questioning? Robin Anderson’s offices were paid for with $1.5 million in state dollars, by the way.  Why is no one asking these people any questions about their conduct?  The human rights issue has been huge in Mason City over the past year and longer.  Why did no other media question these state officials, who are charged with handling all our human rights complaints?  The Globe Gazette and KIMT should be ashamed of themselves for not being real journalists and asking questions.  They are the true frauds in Mason City.  KGLO did not even bother to attend at all.

That begs the next question. When is it OK to touch someone, to grab their arm, to bump them on purpose, with bad intent?  This is a real can of worms law enforcement is faced with. If they say it is OK to do as Ackerman and Anderson did, this gives license to much worse by others.  We can all now grab anyone we like and not fear police action.  We can bump and step on people we do not like, bully them, and know that the law is on our side.  Police need to do the right thing and arrest them both, immediately. Anyone arrested for assault for less than what they did should come forward.  Police right now are telling me this is a “high profile case” and will likely refuse to file charges unless I turn over all 45 minutes of video from the presentation and even then it could be a lost cause.  I know they fear Robin Anderson and City Hall on this one, and I fear no charges will be brought at all.  If Mason City police cannot handle this situation, then they need to bring in an outside agency that does not fear Anderson and her crew.


About the event itself. It was not well-attended. I counted 16 people in attendance, including myself. Two people were the ladies from the Iowa Civil Rights Commission; three were members of the media; another two were City Administrator Brent Trout and council member Janet Solberg; three more were Anderson, her coffee boy (and employee) Tanner O’Brien and his mother Jodi O’Brien. Julie Valencia, Mark Stanton and Ann Harty of the Mason City Human Rights Commission were there. The other three people I do not know.  Pretty much all of these people are juiced into the Mason City good old boy system.  The Chamber Offices are in downtown Mason City and surrounded by businesses. Hardly anyone took the time to attend. Maybe area business owners didn’t know about it or didn’t want to pay Robin $10 for half a sub, a cookie and a bottle of water. I am checking to see how much it cost the City to rent the room from Anderson. I am guessing it was not free, but there is a conference room at City Hall plenty big enough to hold twice this number of people.  I am also betting the city bought lunch for Trout, Solberg and the Human Rights Commissioners.  I hope we are all enjoying our 10% tax hike with another looming.

Since when is human rights about collecting money, making a profit and holding semi-secret meetings?  Is our government not here to serve us?  Do we not pay taxes for these programs?  Did you know that, for example, the next human rights training event held in Iowa City, previously announced for November 12, is touted as “ideal for service providers, store owners/managers, restaurant owners/managers, hotel owners/managers, mall management as well as the general public to understand and learn your rights” and will be held at the public library.  Everyone is invited, openly, to attend. 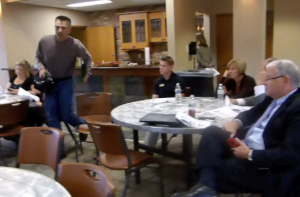 Seconds later, Tim Ackerman, working for the Globe Gazette, advances across the room and makes contact with Marquardt

That’s not how Mason City advertised their human rights event.  It was only announced on October 6 that this event would be held – less than 8 days later. The city wrote on its website and via Facebook that “Cost is $10 and includes lunch.” (See screenshots, below.)  The cost alone excludes many here in Mason City from even considering attending.  When I arrived this afternoon to attend, there were no signs or anything indicating the event was taking place. I entered Robin’s palace and asked the front counter lady and she said to go to the third floor. It is my opinion, that the general public was not wanted there. No, city leaders running this event did not explicitly say this, of course; they are way too slick to make that mistake. However, charging a fee, giving little to no notice of the event and the fact it was held almost in secret upstairs at the Chamber of Commerce made it clear to me that the average person was not wanted there. In fact, the event was only for employers; employees were not invited. I said during the meeting that the information being given was nothing more than a cheat sheet for bosses on how not to get caught or sued for abusing employees.  Maybe Robin Anderson and Tim Ackerman took offense to that.  I think they were pissed the minute I walked in the room.

At any rate, I do what I do because the entitlement and free pass that this small group of people here in Mason City has taken for itself amounts to a hijacking of the community.  Most people have no say in anything, and don’t take the opportunity to get involved when they have the chance.  So, what we are left with is a perversion of how things should be handled, and this “human rights symposium” is a result.

You can be sure I will continue to be a thorn in their side. 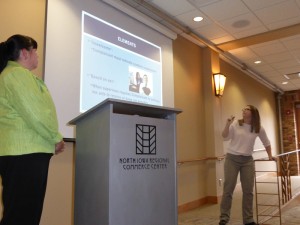 “Not So Blurred Lines: Harassment in the Workplace”
Employees were not invited – only employers and bosses. 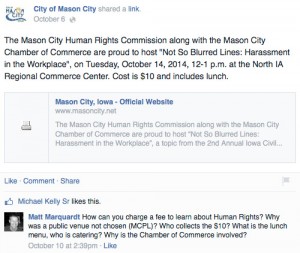 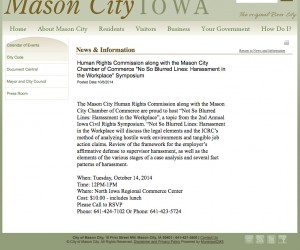 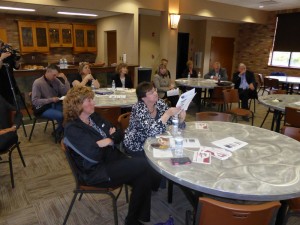 Event was not well attended. 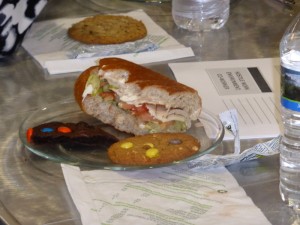