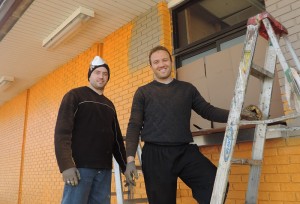 That’s the name of a new Italian restaurant that is coming to Mason City. Two European brothers are toiling in a familiar south side storefront in preparation for an opening in the coming weeks.

The Kelmendi borthers found their way to Mason City from Texas through a mutual friend who insisted they come here and open a restaurant. The pair  – originally form Kosovo – came to America first in New York, then to Texas, now they are here, opening their first restaurant.

“We are cooks, so this is not what we are used to,” said Ricky Kelmenda Sunday afternoon. Ricky and his brother were outside on a gorgeous afternoon, spraying orange paint on the brick exterior at 1303 South Federal Avenue.  “We would rather be in the kitchen.”

Ricky said that they have received a warm welcome so far in Mason City.  Local realtor Tim Latham has given them advice, and hooked them up with contractors to complete needed electrical, plumbing and carpentry work.  They do not know many people in town yet, and are hoping their food will help make them lots of friends.

“We will serve veal, steaks, pasta of course, pizza, everything Italian,” Ricky said.  “It’s going to be the best food in town.”

In the meantime, a lot of work is needed inside the restaurant.  The floor is a puzzle they need to solve.  Ceiling tiles need replacing, some walls will be added, drop-down lighting over all the in-coming booths.  Already Monday, a Blazek Electric truck was in the parking lot, and men were coming and going.

The building was originally a Burger King restaurant, for years, before that closed.  It then became the Happy Wok restaurant, and then most recently the Lantern Japanese and Chinese restaurant, which closed last fall. 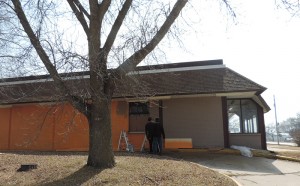 The Kelmedi’s work on the exterior of the building.  Paint, landscaping, and more are underway. 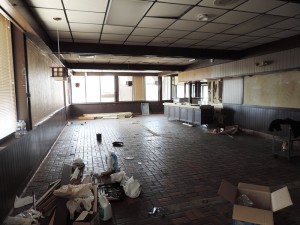 Interior work just getting underway.  Electricians, plumbers, carpenters are on the way this week.